Will you believe us if we tell you that Vanaja of Sembaruthi has kids who are grown up? These photos are proof! 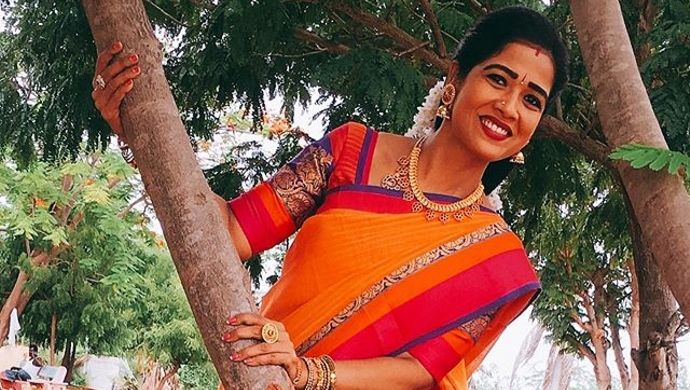 Vanaja from Sembaruthi is one of those villis from television who looks absolutely gorgeous in her traditional looks. In fact, it’s hard to believe that she is actually a mother to teenage kids. We stumbled upon the actress’ Instagram posts that she dedicated to her children and we feel she is the living example of a Santoor Mom. Laxmi as Vanaja in Sembaruthi is one of the most stylish villis on television for all the right reasons. If you’re someone who loves shopping for sarees and hoarding them, her Instagram account is the right one to follow. She wears the most gorgeous sarees and pairs it up with traditional yet beautiful jewelry.

Watch the recent episode of Sembaruthi right here, in case you missed it.

These three photos of Laxmi from the show are proof enough that she is indeed a Santoor Mom.

My Best Blessing in Life!! Ever Grateful to God for my bundle of joy. Love u so much Mohy kutty 😘😘Mohan virat ❤️❤️❤️ Proud to be ur mom!! Hearty wishes to all amazing moms on this lovely Mother's day !! U are really awesome!! God bless all😍❤

Doesn’t she look beautiful? The actress adores her daughter and these posts are proof enough that she sees her daughter as her best friend. She is all love and praise for her daughter on social media. She also keeps updating fans with new pictures of herself in a new look quite often.  You would definitely want to save some of her looks as style inspiration.

when my kids around me,my happiness will increase twice 😇😇happy Sunday outing with my Mohy boy and shabbo doll❤️❤️😘😘

Not just stylish but she is also one of the funniest villains down South. While she does create a sense of intrigue about her character with all the devious plans, she also manages to make you laugh with her impeccable comic timing.  For more such entertainment, watch Kandukondain Kandukondain streaming on ZEE5.