Jiiva celebrates his 36th birthday today and here's why we think you should indulge in watching his 2019 film Gorilla. 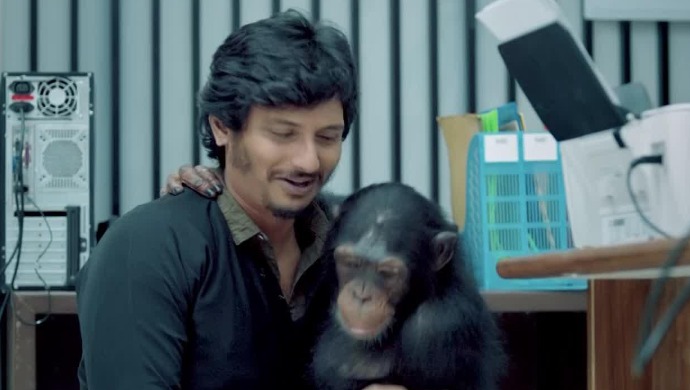 South actor Amar B Choudary, popularly known by his industry name Jiiva, turns 36 today! The actor has been active in the industry for more than a decade now. Thanks to his mettle as an actor and his screen presence, he has managed to build a name and reputation in the industry. Jiva’s fan base is a testament to how much people love him.

As the star celebrates his 36th birthday today, we thought perhaps the best way to revel in his joy, would be to watch his latest films. Luckily, we’ve got you covered! Jiiva’s recent release Gorilla, is now available on the ZEE5 platform. Here are three reasons why you should definitely use your weekend to watch this film.

1. Jiiva and the gang team up with a chimp

Hilarity ensues when humans team up with animals for crimes. There are several films where you can see how well the humour works out with the presence of an animal. Jiiva and the chimp’s camaraderie, is just as funny. In fact, there are several moments in the movie where the three actors, along with their chimp buddy, get us rolling on the floor laughing.

2. The actor and Shalini Pandey’s chemistry

Shalini Pandey has earned a name for herself as the romantic interest, in films. It is no surprise that with her beauty and acting skills, she manages to display impeccable chemistry with her co-stars. Her onscreen equation with Jiiva in Gorilla is simply amazing! In fact, you should definitely watch the film, for its songs like Yaaradiyo and more, where the two showcase some lovely moments together.

Can Yogi Babu’s comic timing ever go wrong? In fact, his fan club seems to be expanding as the days go by! In Gorilla, as the comedian teams up with Jiiva, the film takes us on a roller coaster ride. The actor and comedian definitely make quite a riotous pair, and we simply can’t get enough of them.

Gorilla stars Jiiva, Shalini Pandey, Radha Ravi, Sathish, Yogi Babu and more. The film revolves around three down-on-luck pals who decide to rob a bank to solve all their problems. Jeeva’s (Jiiva) love life is in crisis, as Jhansi (Shalini Pandey) is being forced to get married. Sathish (played by Sathish) has been fired from his job, and needs money to take care of his family. Venkat (Vivek Prasanna) is a struggling actor who assumes that money can make him a star. In an inebriated state, the three friends rob a bank and involve a chimp as an accomplice, in their flawed ruse. Of course, things don’t go as planned and what follows is a bunch of unfortunate but hilarious events!

Here Are Some Gritty Crime Tales That Will Blow Your Mind! Watch Police Diary On ZEE5

Sathya 4 January 2020 Preview: Sathya And Prabhu Put Up A Show For Janaki?