Krishnapriya and Vishu are relatively new faces to the Tamil TV audiences but they both have been a part of several TV series. 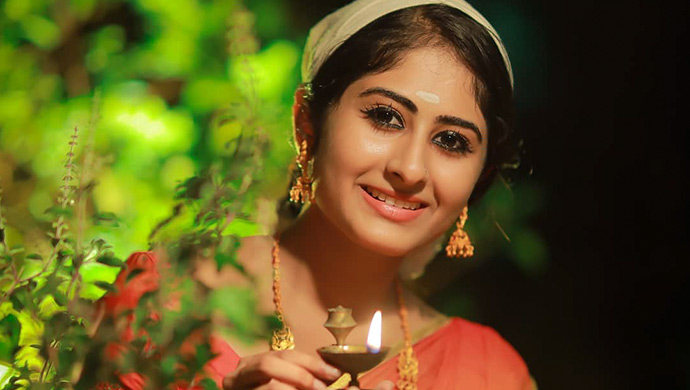 Krishnapriya K Nair is seen as Preethi in Kandukondain Kandukondain. The show that airs on ZEE5 deals with the conflicts that the young couple Vikram and Preethi have to face.  The complexities that arise in their life is due to some traditions and astrological patterns. Although this is what forms the central crux of the series, it also deals with different other prevalent issues.

Now, both the leading actors Krishnapriya and Vishu are relatively new faces to the Tamil TV audiences but they both have been active in the field of TV series and have made a name of themselves. Krishnapriya is basically a Malayalee actress who hails from Thrissur, Kerala.

So, here are some Instagram posts of this true Malayalee beauty that you should not miss out.

With the thick paste of sandalwood that garners this beauty’s forehead and a smile that breaks on her lips, she is sure to complete the image of a devout girl.

The blood red vermilion in her hand and eyes that seek for answers, this Jimmiki kammal girl is surely a pleasant sight for the sore eyes.

3. The Rain Of Flowers

Draped in a green saree placed in contrast with the grey background, she definitely makes a portrait worth image.

God's blessings go far beyond anything we could ever dream 😇🧚‍♀️ Pc: @rebecca.santhosh

The true Malayalee girl is someone who never fails to make her presence felt in the temples.

The setting of the forest and the striking features of the actress gives her an aura of being a goddess of the forest.

So, what do you think about these pictures of Krishnapriya? Share your thoughts in the section below.

In case you like crime thrillers, check out more streaming on ZEE5.

Alarm: Watch How A Cop Tries To Race Against The Time And Solves Crime

Dance Jodi Dance Juniors Grand Finale: From Finalists To Judges, All You Need To Know!