The horror and action elements in the movie are sure to draw your attention. 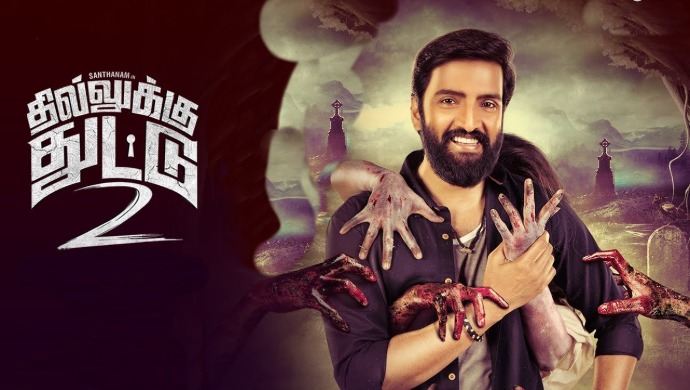 Dhilluku Dhuddu 2 is a horror comedy which narrates the story of Viji (Santhanam), an autorickshaw driver and his uncle ( Motta Rajendran). Now it is not a story about the issues that happen in their life that hold a centre stage but it is, in fact, the issues they cause in the housing colony, that they live, that takes an important space in the story.  This uncle and nephew manage to give sleepless nights to their neighbours, all thanks to their irritating drinking habits. Interestingly, Viji’s neighbours come up with a unique solution to put an end to his torture and this here forms that crux of the story.

There is no doubt about the fact that Santhanam is a good actor but his version of the main hero is something that we have only been seeing since a past few movies and in this movie, Santhanam nails the character of Viji with his seasoned performance.

With versatility in each character that he depicts, this actor has clearly left an imprint on the character, of Viji’s uncle, that he plays in this movie. His comic sense and body language they all tend to give you a laugh riot.

The cute romance between Viji and Maya is also another highlighting factor that makes this movie a must watch.

The silent dark alleys and the spirits that haunt people who fall in love with Maya, is also something that adds to the USP of the movie.

Another interesting aspect that you should definitely not miss out is the action sequences which are well executed. These are sure to blow your mind!

So, what are you waiting for, go to the ZEE5 app and check this movie, right now!

Soodhu Kavvum: The Struggle Of Four Desperate People To Create Meaning In the Life