Actor Vishnu Vishal acts as a hairstylist for his father and tweets, "Desperate times, desperate measures." Scroll down to have a look. 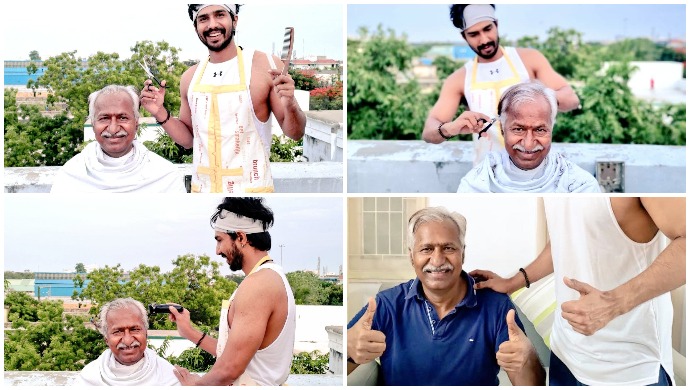 During the nationwide lockdown, except for essential services, everything else is shut. Ever since the outbreak of the Coronavirus pandemic, people have become more self-reliant. From cooking to cleaning utensils and exploring new talents, the celebrities are leaving no stone unturned to impress us. Now the latest one to join the gang is actor, Vishnu Vishal.

Vishnu Vishal, who rose to prominence with his character Marimuthu, in Suseenthiran’s Vennila debut film, Kabadi Kuzhu (2009), shared a couple of pictures on the micro-blogging site. And his post is winning the hearts right now. The actor took to Twiter to share pictures, where he can be seen acting as a hairstylist to his father.

Alongside the post, Vishnu wrote, ” “Desperate times, desperate measures.. Becoming dad’s hair stylist:) Every job looks so damn easy unless you do it on your own #MyLockdownAvatars (sic).”

Meanwhile, on the personal front, Vishnu Vishal was in a relationship with Rajini Natraj, daughter of the actor K Natraj, for four years. The two tied the knot in 2011 and became proud parents to a son, Aryan in 2017. But in 2018, the actor and his wife got separated, owing to personal reasons.

However, now they have moved on with their lives and the custody of the child is with his wife. But Vishnu, who adores his son, regularly visits Aryan to spend quality time with him.

Every job looks so damn easy unless you do it on your own 😆#MyLockdownAvatars pic.twitter.com/ScMSpNwqI1

On the career front, Vishnu Vishal is currently awaiting for the release of his upcoming trilingual film, Kaadan, which is directed by Prabu Solomon. The film is made as Aranya in Telugu, and Haathi Mere Saathi in Hindi was scheduled for April 2020 release. However, the date has been postponed in the wake of coronavirus pandemic. Apart from Kaadan, Vishnu also has FIR and Mohandas in his kitty. Meanwhile, Vishnu has joined hands with Jiivi director-writer combo for his next project.

Stay tuned to this space for more updates on your favourite actors from the television and film industry!

Also, if you are a fan of Tamil dramas, you can check out the Tamil web series Karoline Meenakshi, currently streaming on ZEE5.

From Achamindri To Sowkarpettai, 6 Intriguing Films To Chase Away Your Lockdown Blues

Kolamaavu Kokila, Naan Sirithal - 5 Comedy Films To Lift Up Your Spirits During Lockdown