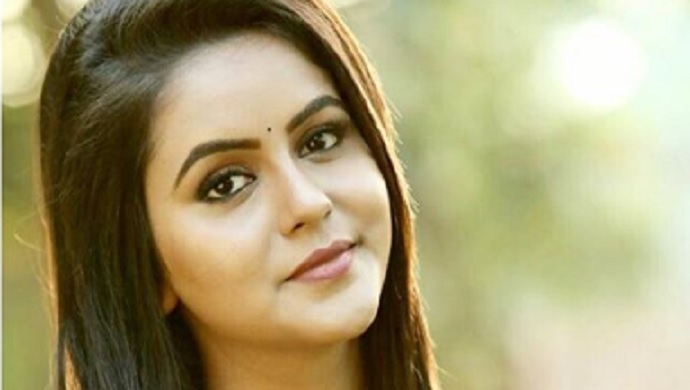 There’s a famous saying that goes something like this – ‘A smile is a curved line that sets things straight’. Chaitra Reddy believes strongly in it. She goes a step further and says that laughing at your problems will kick out negativity from your life. Now, isn’t that super cool? It may seem a difficult and a crazy thing to do but isn’t that the best way to deal with all the problems.

Testing times come and go, and hence, you must not keep thinking and worrying about it. If good times are not permanent, then tricky times aren’t eternal either. So Chaitra Reddy raises a pertinent point through her latest Instagram post. The picture shared with the post speaks volumes about Chaitra’s perceptive about life. Her smile and her glowing face say it all.

Chaitra, who recently celebrated her birthday, shared her pics with her special someone, Rakesh Samala, a filmmaker and a cinematographer. Her Yaaradi Nee Mohini co-stars Nakshatra (Vennila) and Srinidhi Sudarshan (Janani) attended her birthday bash.

For the unversed, Chaitra plays Swetha, a cunning woman obsessed with Mutharasan. She wants to marry Mutharasan by hook or crook and is willing to go to any extent to get what she wants. She has even killed an older woman who helped Annamalai in his attempt to free Mutharasan from the effects of black magic. She intends to eliminate all those who pose as hurdles on her path. And now, after throwing Annamalai, Mutharasan’s best friend out of the house, she targets Vennila.

In real life, Chaitra is nowhere close to Swetha. Take a leaf out of her book and keep following supernatural thriller Yaaradi Nee Mohini. And for more entertainment, check out Poove Poochoodava, on ZEE5.