After a spectacular performance, Darshan and Nowfal were declared as the title winners and later were awarded a trophy and cash prize of Rs 5 lakh. 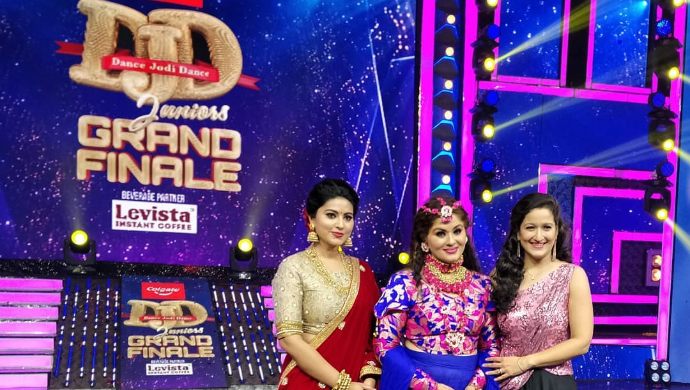 The grand finale of Dance Jodi Dance Juniors held on May 5 was an event to remember. The grandeur, the performance, the hosts and the guests, they all remain etched in the memory. This show, which has been entertaining the audience for the past few months, has managed to woo the hearts of its viewers in a big way.  For ardent viewers of this show, in many ways was a dream come true. As they got an opportunity to witness their favourite jodis set the stage on fire.  This show which airs on ZEE5 had Sudha Chandran, Sneha and Laila Mehdin in the judging panel. In the end, after a spectacular performance, Darshan and Nowfal were declared as the title winners, who later were awarded a trophy and a cash prize of Rs 5 lakh.

Watch the grand finale of Dance Jodi Dance Junior, as the event unfolds in front of your eyes.

This grand event was co-hosted by talented artists Archana Chandhoke and Deepak Dinakar. While actress Radhika Sarathkumar was the special guest at the finale. Other than Radhika celebrities like Lakshmi Ramakrishnan, Viji Chandrasekhar and others were a part of the grand finale.

After the strenuous efforts and post many rounds of eliminations, the five pairs that had made its way into the grand finale of the show were Darshan and Nowfal, Janani and Pavan Lalyan, Santhosh and Dhanush, Rajesh and Dheeraj, and SreeSumanth and Rakshith. All of the above mentioned talented jodis were given a chance to project their talents in two different rounds, namely,  a class round and a mass round.

After the performance by the winning jodi Judge Sudha Chandran commented on their performance and said, “I have never seen these props used before in any other reality show till date”.

So, why wait? go catch up the whole event on ZEE5.

Goli Soda: Watch The Struggle Of Four Nameless Youths To Create An Identity