One can say that it is the chemistry between Santhanam and Rajendran that gives the movie an extra highlight. 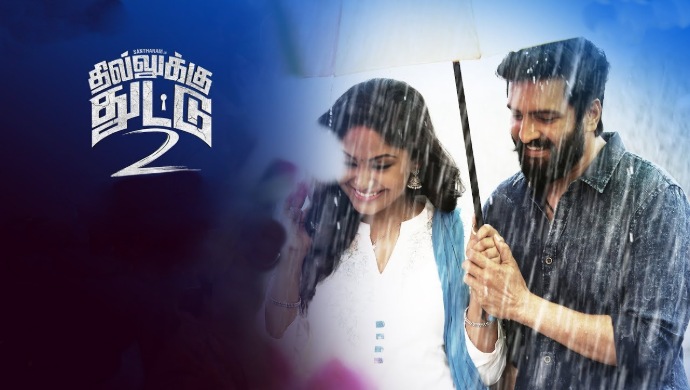 Dhilluku Dhuddu 2,  revolves around the characters Viji (Santhanam) and his uncle (Motta Rajendran), who basically are the troublemakers in their locality.  Thus, every day it is a big task for their neighbours to deal with these two drunkards and at the same time maintain their decency. this everyday torture drives them to a situation where they come up with a plan, as directed by Dr Karthik, to make Viji fall in love with Maya (Shritha Sivadas) who it seems somehow attracts some paranormal activities.

Watch the fun and suspense in the movie Dhilluku Dhuddu 2.

Santhanam who plays the part of the lead in the movie deviates from his old self and experiments with action and romance along with his usual comic sense. This is a welcome change which acts as one of the highlighting features of the film. The manner in which he has depicted the character of Viji is different and it is engaging too. On the other hand, the character of Maya(Sritha Sivadas), doesn’t have much scope in this movie, but in that limited arena, she proves her worth by giving a genuine performance.

Apart from these two, we see Motta Rajendran who plays the part of Viji’s uncle. His screen presence with his perfect time for comic elements certainly makes this a full-fledged comedy. One can say that it is the chemistry between Santhanam and Rajendran that gives the movie an extra highlight, all thanks to their timely counter dialogues. In the second half of the movie, we see Urvasi, who steps in and she also adds to the fun quotient of the movie.

Although this movie has elements of horror, it still is a comedy film which will make you laugh out loud. Watch it and let us know if you enjoyed it in the comments below!