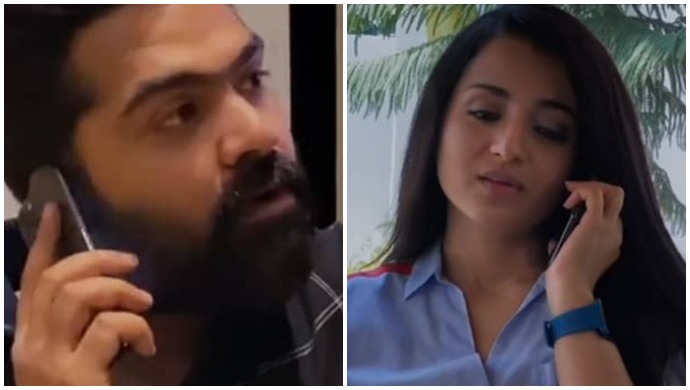 Remember, earlier we had reported that South actors Silambarasan and Trisha have shot and completed a new film amidst the nationwide lockdown? Well, we did tell you that it is not a feature film but a short film and that the actors, without breaking any lockdown rules laid by the government, shot for their portions in their respective houses. Now, recently, the director of the film Gautham Vasudev Menon took to his Instagram page to share the BTS video.

In the video posted by the filmmaker on the photo-sharing app, we can see that Simbu and Gautham are speaking on a video call. While Gautham has already shared the script with Simbu, he explains the shots to the actor and asks him to send the video file once he is done shooting. Simbu can also be seen assuring the director and updating him that everything is shooting ready. Gautham, alongside this video, wrote, “This is how we made it happen Thank you Silambarasan, I loved the process! #karthikdialseythayenn (sic)”

Talking about the short film, Director GVM is bringing back the popular on-screen couple Karthik (Simbu) and Jessie (Trisha), who did not reunite in the ending of the hit romance ‘Vinnaithaandi Varuvaaya’ together once again through his short film Karthik Dial Seiydha Yenn. Recently, the director dropped the teaser online and fans can’t wait to see the two onscreen once again.

Check Out the BTS Video Here:

Thank you SIlambarasan, I loved the process! #karthikdialseythayenn

Silambarasan is fondly known as Simbu or STR. The actor, who is one of the most popular actors of Kollywood, enjoys a humongous fan base in Tamil Nadu. Simbu, on the work front, was last seen in the Tamil remake of Telugu hit film Attarintiki Daredi, titled Vantha Rajavathaan Varuven. The actor will next be seen in Venkat Prabhu’s Maanaadu besides Gautham Vasudev Menon’s Karthik Dial Seytha Yenn.

If you love watching Tamil movies, you can also check out Vijay Sethupathi’s Sindhubaadh, currently streaming on ZEE5.