Kamalesh essayed the character of a student named Kathir, who had a crush on his school Headmistress Geetha Rani (Played by Jyothika). 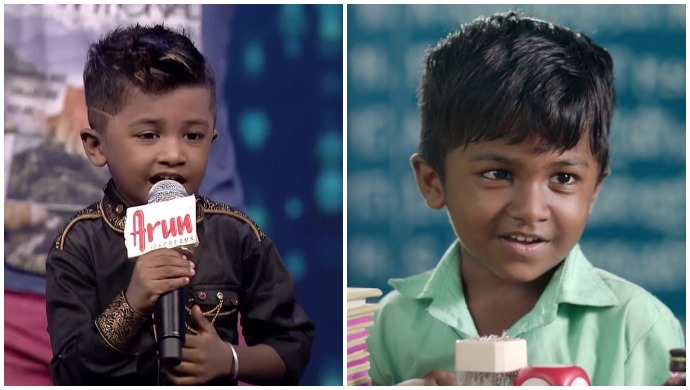 Remember the kid who won the hearts of judges and audiences in Sa Re Ga Ma Pa Little Champs?  Yes, you guessed it right. It was Kamalesh! Also known as Rockstar, Kamlesh was undoubtedly one of the most-loved contestants in the show. The boy impressed everyone on this show with his singing talent.

But, do you also know the little superstar was also an actor in Jyothika’s film Raatchasi? Kamalesh played an important role in the film, which was helmed by Syed Gowthamraj and featured Jyothika in the lead role.

Kamalesh essayed the character of a student named Kathir, who had a crush on his school headmistress, played by Jyothika. If you have seen the film, you would remember the cute scene from the movie, where Kamalesh adorably proposes to his Headmistress Geetha Rani, while the latter smartly handles the situation.

Check Out the Adorable Scene From Raatchasi Here:

For those who are yet to watch Raatchasi; the film revolves around the headmistress of a government school Geetha Rani (Jyothika), who brings in several changes at her institution despite facing odds from various quarters. Gowthamraj’s film touches upon pressing issues, that are plaguing government schools.

No doubt, the actress’ performance is solid and sincere in the film. Produced by SR Prakashbabu and SR Prabhu under the banner of Dream Warrior Pictures; the film also stars Hareesh Peradi, Poornima Bhagyaraj, Sathyan, Nagineedu, Aruldoss, Kavitha Bharathi, Muthuraman and of course Rockstar Kamalesh in essential roles.

Talking about the show, Sa Re Ga Ma Pa Lil Champs is a music reality television show where the little masters of music from different parts of India get a chance to showcase their singing talent in front of an exceptional panel of judges. This show gives these kids an opportunity to make their dreams come true.

If you like watching offbeat Tamil films, you must check out Vijay Sethupathi’s Sindhubaadh, currently streaming on ZEE5.