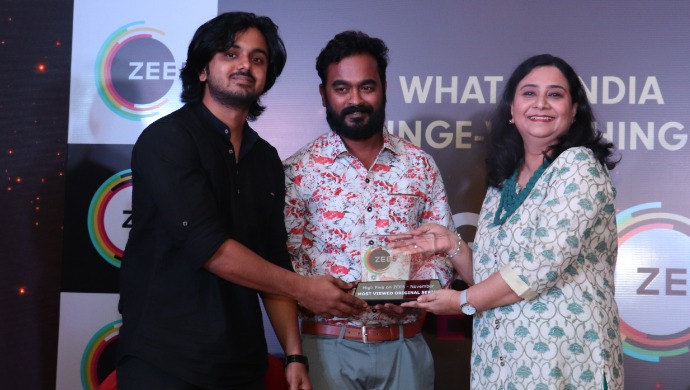 Auto Shankar has done it again! The ZEE5 original thriller series, based on the life and story of a tamil serial killer, has garnered a lot of attention and critical acclaim since its release on the ZEE5 platform in April this year. And now, it has won another accolade, this time at the debut edition of High Five On Zee5 .

Ever since it’s genesis, ZEE5 has been introducing innumerable original content on their platform in 12 regional languages on a regular basis. With its strong base of engaging and compelling online streaming content, the OTT platform certainly has become a favourite. Hence, as part of their movement to engage audiences from all walks of life, ZEE5 has also spearheaded an awards show to recognize the best shows and online content offered by their platform. The first edition of High Five On Zee5 took place on 20 December 2019 in Mumbai, and one Tamil show managed to shine out amongst the plethora of regional content offered by the platform.

When the details about the most viewed content on the ZEE5 platform was announced at the awards night, Auto Shankar, bagged the trophy for most-viewed regional show. Released earlier this year along with other popular crime-thriller originals like Rangbaaz and Abhay, Auto Shankar documents the life of serial killer Shankar through the lens of his wife, his neighbours, friends and the police. Actor Appani Sarath, who plays the lead in the Original series, also attended the awards function.

Speaking about the genesis of High Five On ZEE5 at the awards function, Aparna Acharekar, Programming Head, ZEE5 India said, “It has been a great run for us at ZEE5, launching 100+ originals in the last 18 months, and some of them being pathbreaking in many ways. Within the OTT industry, being India’s largest original creator by leaps and bounds, we have managed to satiate consumers taste palate by delivering content in 12 languages. As we move into the next phase of leadership growth, we wanted to pause and recognize ZEE5’s content creators ecosystem without whom, we wouldn’t have become India’s No.1 choice of Entertainment. HIGH FIVE ON ZEE5 is revolutionary in many ways and we intend to make it eloquent and exciting month on month.”

Over 20 years ago, Chennai was collectively appalled and shocked when the police uncovered the man behind the serial killings on the streets of Thiruvanmiyur, Chennai between 1988-1989 – Auto Shankar. Hailing from Periyar Nagar, Gauri Shankar aka Auto Shankar got infamous overnight for brutally murdering six people and eventually being hanged to death for his crimes in 1995. The Zee5 Original is a retelling of the various shades of the criminal, a good guy-next-door by day and a debauched serial killer by night. The show also stars Selva Pandian, Rajesh Dev, Vasudha among others. Do not miss the series for it carries the heinousness yet humility of a man known to have killed six people.

Sathya 23 December 2019 Preview: Prabhu And Sathya Get Ready For Their First Night