Junga Actress Sayyeshaa Saigal Showcases How Ethnic Wear Can Be Minimal Yet Glamorous Too!

Junga actress Sayyeshaa Saigal loves to flaunt her collection of ethnic wear. You can check out some of her best looks here. 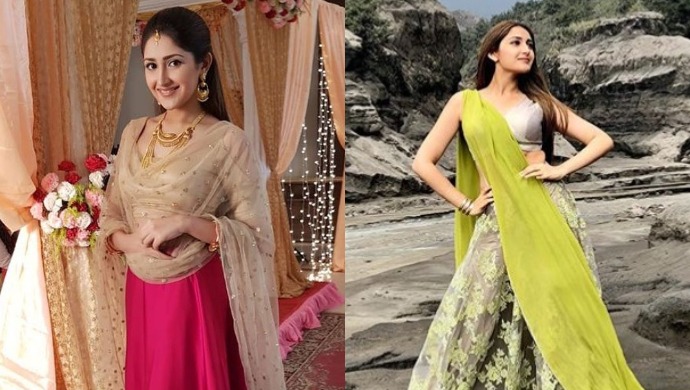 It has been less than five years since actress Sayyeshaa Saigal entered the film industry. The actress has managed to charm fans, through the years, with her talent. She hails from a filmy family and is the daughter of actors Sumeet Saigal, Shaheen Banu, and the grandniece of actors Saira Banu and Dilip Kumar. So it could be said that films run in her veins. However, the diva also seems to have quite a knack for pullling off minimalistic looking ethnic outfits

Sayyeshaa has shared some alluring looks in ethereal ensembles, that simply can’t be ignored. Keeping her looks and ensembles simple with clean sharp lines, the actress boasts of a lovely wardrobe of ethnic outfits. Scroll below to check them out!

Sayyeshaa looks radiant in this pink and beige ensemble

Happy Diwali to you and your family! Wishing you all the happiness and prosperity in the world! ❤️❤️💥 #diwali#festival#festivities#happy#special#love#familytime#instadaily#instapicture#traditional#ootd

This fuschia and beige outfit is both elegant and simple, with minimal embroidery. The satiny material of the lehenga adds a touch of sophistication to the ensemble. Even the accessories, although traditional, have clean lines with not too much intricate work. The perfect outfit for a wedding of a somewhat distant relative or a party with ethnic dress code.

Another pretty-in-pink look by the actress!

Attending a wedding in the city of Nizams! 💃 #wedding#ready#keepingitsimple#hyderabad#ootd#jewellery#love#dressup#pink#instapicture#banarsi

When the Junga actress attended a wedding in Hyderabad, she chose to wear a traditional pink outfit with gold zari work. This outfit is neither too heavy nor too minimal and the diva perfected the look with a chunky golden neckpiece.

When minimal is super beguiling

We have come to believe that Sayyeshaa is the torchbearer of minimal looks! With this simple saree, the actress has proven how she can make a plain-Jane look also work.

The green dupatta might be slightly underwhelming but the actress makes it work. The lehenga especially, deserves to be part of our wardrobe. What, say?

How angelic does Sayyeshaa look in this white outfit?

Eid Mubarak to you all! ❤️ #Kashmir#srinagar#tajvivanta#eid#mumandme#love#peace#besttimeever#holiday#chilling#naturalbeauty#beautiful#soothing#happyme#instadaily#instapicture

The white ensemble with its delicate embroidered work is dainty and pleasing.

Sayyeshaa plays Yazhini in Junga, which also stars Vijay Sethupathi, Saranya Ponvanan and Neha Sharma in pivotal roles. The story revolves around a bus conductor, who leads a simple life and lives with his mother. When he learns about his father’s ancestral property that was lost to Chettiyar, Junga decides to seek revenge and turn to a life of crime, so that he can retrieve the property. Will he be successful? Watch the film right here on ZEE5!

Why Does Vedha's Story Haunt Vikram? Watch The Cop-Drama On ZEE5