Madras Meter Show Episode 2: Vivek And Sathish Will Leave You In Splits With Their Act

Sathish and Vivek who shared screen space with Jeeva in Gorilla, showcased their humorous side by sharing their experience of working on the film. 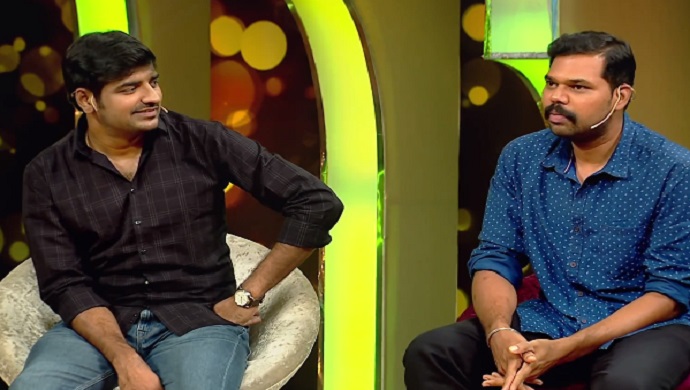 The second episode of Madras Meter Show hosted by Vaidhya turned out to be engaging and entertaining. The show hosted by Vaidhya had actors Vivek and Sathish as special guests in the celebrity segment. The two actors, who shared screen space with actor Jeeva in Gorilla, showcased their humorous side by sharing their experiences of working on the film. And the game round saw them inhaling helium balloon and asking each other a set of questions. To know how the segment unfolded, and to get your funny bone tickled, watch the second episode of MMS.

The second segment ‘Yen Yeduku with RJ Vignesh’ highlighted the evil called piracy that deprives a person of his livelihood. Vignesh explained what piracy does and why people must not encourage the act of watching pirated films and TV shows. The Hashtagger segment presented by Vaidhya talked about the trends that made waves on social media last week while Divya and Durgesh spoke about the events that happened offline.

RJ Shruthi, who presented the ‘Oru 2 Minutes Irruka’ segment, reviewed the film Jackpot starring Revathy and Jyothika for the first time. If you are wondering whether or not to watch the film, check out what Shruthi has to say.
In the next segment, the presenter explains what would it be like if Rajinikanth becomes the Chief Minister of Tamil Nadu. Have your ever given it a thought? If not, check out the show to explore the possibilities. And last but the least the Mock News Section presented by Durgesh and Divya read out headlines of imaginary news that will leave you in splits. The second episode of MMS was equally entertaining and for more entertainment, check out the videos on ZEE5.