Missing Sathya And Prabhu? Here’s A Video Of The Two From Sets Of Genes!

Ayesha and Vishnu share an incredible off-screen camaraderie and we just can't get enough of them. Scroll to watch the video! 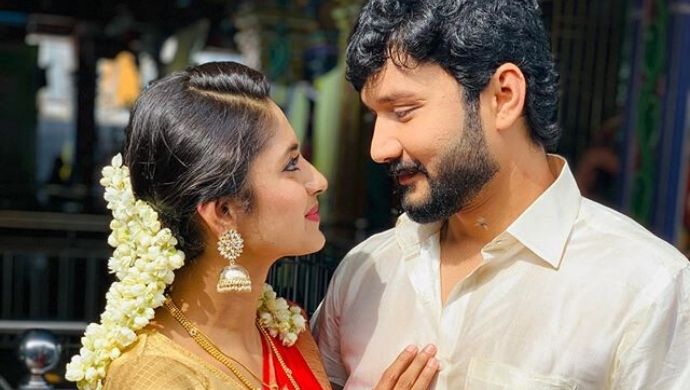 Ayesha and Vishnu, who are currently winning hearts with their portrayal of Sathya and Prabhu in Zee Tamil’s show Sathya, are undoubtedly one of the most loved on-screen couples. Every time they make an appearance together (in an award show or other Zee Tamil shows), we can’t stop gushing about the two. Not only Ayesha and Vishnu’s on-screen chemistry is unusual, but the two also share an incredible off-screen camaraderie and we just can’t get enough of them.

Since the filming of the telly series has been suspended owing to the Coronavirus outbreak, we are sure that fans and Zee Tamil’s ardent viewers are missing their favourite couple and shows. Well, if you are a fan of the series Sathya and can’t wait for it to return to your TV screens, here’s a throwback video of Ayesha and Prabhu and their off-screen koothu.

This is a clip from an episode of the Tamil reality game show Genes, which is hosted by Priya Raman. Ayesha (Sathya) and Vishnu (Prabhu) had not only visited the sets of Genes but also participated in the games.

Meanwhile, Ayesha and Vishnu are rumoured to be dating each other. However, the two have never confirmed or denied the same. Well, their off-screen chemistry makes us want to believe the rumours though.

On a different note, since Ayesha and Vishnu’s Sathya is yet to make their comeback, the channel (ZEE5) has brought some lockdown special episodes from your favourite show Sathya for your entertainment. It’s a six-episode series of 10 minutes each. Also, Sathya’s cast has shot the episodes at their respective homes; They have not breached the lockdown rules.

Watch Sathya Lockdown Special series and tell us how did you like it in the comment section below. Stay tuned!

If you like to watch more such shows, also watch Yaaradi Nee Mohini, currently streaming on ZEE5.