Mithra Of Sembaruthi Looks Like A Doll In This Video, Watch

While browsing through Bharatha's Instagram page, we came across a video of hers that shows her cutest avatar. 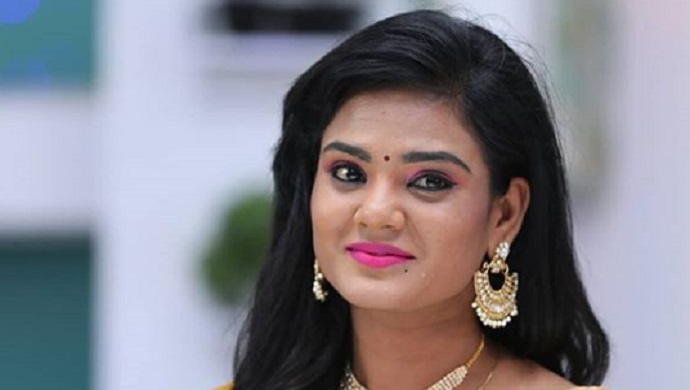 Fans of Sembaruthi don’t want Mithra to come in between Adithya and Parvathy. They don’t like her because she tries to create a rift between their favourite couple, after getting the much-needed support from Vanaja and Nandhini. But here’s a video, that will show Mithra aka Bharatha Naidu in a different avatar. Yes, Bharatha who essays Mithra in the blockbuster TV show is just like us in real life. She is unlike Mithra, who is hell-bent on ruining Akhilandeshwari’s life.

While browsing through Bharatha’s Instagram page, we came across a video of hers that shows her cutest avatar. Bharatha uses a filter while enacting a dialogue and we are sure that her expressions will make you go aww.

Check out the video here:

For the unversed, Mithra plays one of the antagonists in Sembaruthi. She is Nandhini’s younger sister and hails from the Naagpuri Vamsam. She is planted by her sister to avenge the insult meted to her by Akhilandeshwari. Nandhini wants Mithra to marry Adithya to ruin his life and business empire. With Vanaja’s help, Mithra succeeds in impressing Akhilandeshwari, who chooses her for her son Adithya.

She also produces a fake horoscope to convince Akhilandeshwari that there cannot be anyone better than her for Adithya. However, there’s someone who secretly keeps an eye on her. The blackmailer hasn’t revealed himself yet but has proved that he is Parvathy’s well-wisher.

Here’s some information for those who joined in late. Sembaruthi is one of the most popular Tamil daily soaps. The makers of the show recently organised an event to celebrate the successful completion of 500 episodes.
If you like watching romantic shows, watch Piriyadha Varam Vendum, starring Vimal Venkat and Madhumita, on ZEE5.

Aishwarya Of Sembaruthi Explains The Importance Of Being Simple In Life