Subbalakshmi goes shopping for western clothes, gets a makeover and heads to a pub to have a few drinks and celebrate her freedom. 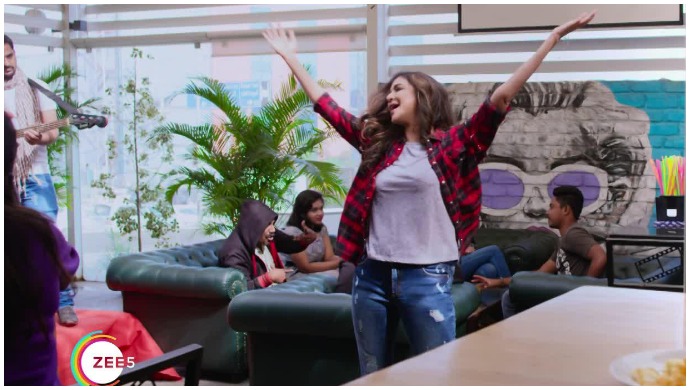 In the previous episode of Mrs. Subbalakshmi, Subramanyam is shell-shocked to realise that his wife has left him. Meanwhile, Subbalakshmi visits the temple and prays to God to knock some sense into her husband and decides that now onwards she will focus on herself and her happiness. She purchases an expensive SUV for herself, using her husband’s credit card. Subramanyam, who receives a message on his phone, that a huge amount has been debited from his account, gets a mini heart attack.

In the third episode, Subbalakshmi purchases an SUV for Rs 10 lakh and swipes Subramanyam’s credit card for it. Subramanyam, who receives an intimation of money being debited from his card, gets shocked. Later, Subramanyam goes to the vehicle store to inquire about his wife, however, the store manager tells him that she bought a jeep from them but they don’t anything about her whereabouts. Then, in an attempt to track her down, Subramanyam goes to Subbu’s friend Jhansi’s house, assuming she might have a clue about where his wife went.

However, Jhansi gives him an earful and confirms that she has left him for good. Later, she suggests that he should read his wife’s diary before he goes on a lookout for her. Meanwhile, Subbalakshmi goes shopping for western clothes, gets a makeover and heads to a pub to have a few drinks and celebrate her freedom. A man at the bar tries to make a move on Subbalakshmi but the latter insults him and shoos him away. Will Subramanyam track Subbu down or the latter will return home on her own? Stay tuned.

5 Reasons Why You Should Definitely Watch Pyaar Prema Kaadhal

What do you think about the third episode? Let us know in the comment section below. If you like watch Tamil web series, you can also check out Auto Shankar, streaming on ZEE5.

Sembaruthi: These Cute Moments Of Adi & Parvathy Prove That They're Made For Each Other