At the hotel, the couple narrates their story and explains to Subbalakshmi how dangerous their families are. Will Subbu try to get rid of the couple? 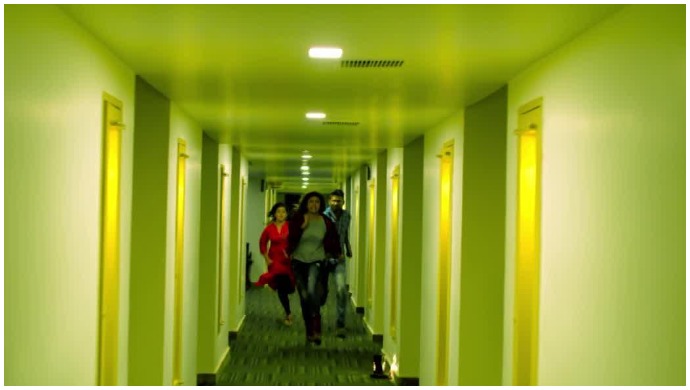 In the previous episode of Mrs. Subbalakshmi, Subbalakshmi participates in a women’s centric radio show. She calls the RJ of a popular radio FM, who had asked her listeners to ring her up and reveal their Women’s Day plan. Subbalakshmi tells the RJ that every woman must date themselves. Explaining it, she adds that women should not only be serving their husbands or bosses all 365 days but also must dedicate at least one day for just themselves. Other listeners get impressed by Subbu’s plan, call the RJ up to reveal their plans too. Meanwhile, Subramanyam heads home to find Subbu’s diary to find clues that will help him to locate her. Later, Subbalakshmi gives a lift to a runaway couple that is trying to evade goons. When the three go to an eatery to have breakfast, they spot the goons there. They try to escape the goons but get noticed.

In the fifth episode, the goons follow Subbalakshmi’s jeep. However, she manages to get away from them. Having escaped, Subbalakshmi and the couple hide at a hotel. Meanwhile, Subramanyam rings up all the phone numbers found in Subbalakshmi’s diary yet he finds no clue about her whereabouts. So, he then goes to the nearby temple, which Subbalakshmi often visits. He is unable to find her there.

If you are new to the series, here´s what you need to know about Mrs. Subbalakshmi, a ZEE5 Original comedy series starring Lakshmi Manchu, Srinivas Avasarala and Adrus Raghu. Fed up of her workaholic husband, Mrs. Subbalakshmi decides to walk out of the house to seek freedom from her routine life. However, her journey turns both adventurous and hilarious when she lands up in the middle of a diamond heist.

What do you think about the third episode? Let us know in the comment section below. If you like watch Tamil web series, you can also check out Police Diary 2.0, streaming on ZEE5.