When Rishi insists Durga must consider his suggestion, she asks him to leave her alone but when he doesn't, she threatens to commit suicide. 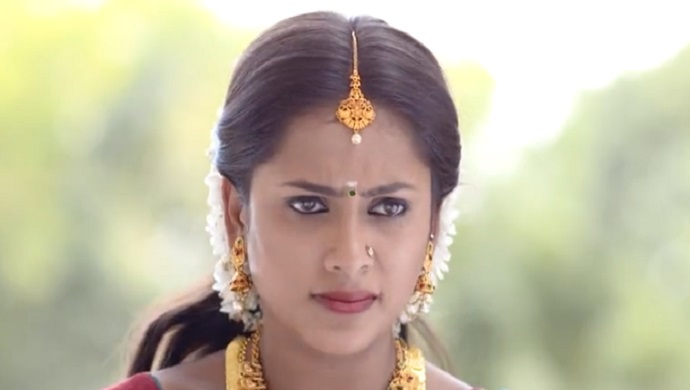 Durga has landed in a dilemma after her uncle takes the blame of stealing the jewelry from the temple. After the Poojari’s daughter proves that the jewelry is in Durga’s house, the villagers boycott her family and ask her to leave the village. They are compelled to live separately with no house in the neighbourhood. Durga’s aunt accuses her for being responsible for what has happened and wonders how she will sustain with two young girls to look after.

Rishi, who has fallen in love with Durga after realising that he is his soulmate since the past life, extends help to her and her family. He says he will take them to Chennai and also promises to secure their future. But Durga is determined to prove that her uncle is not guilty of the crime and she wishes to help him and his wife regain their lost reputation in the society.

When Rishi insists Durga must consider his suggestion, she asks him to leave her alone but when he doesn’t, she threatens to commit suicide. Rishi, who loves her whole-heartedly, thinks of going away because he doesn’t want her to cause harm to herself. However, he makes one last attempt to convince her by saying she must consider a career in acting to be financially self-sufficient but she refuses to pay heed to him. Will Durga succeed in proving that her uncle is innocent? Will she get evidence against the Poojari to prove that he had conspired to accuse them of theft? To know what happens hereafter, watch Piriyatha Varam Vendum, on ZEE5 and for more entertainment, check out Nachiyarpuram, a show starring real-life couple Dinesh and Rachitha.