Police Diary 2.0’s John Kokken Is Here To Give You Couple Goals At The Gym! 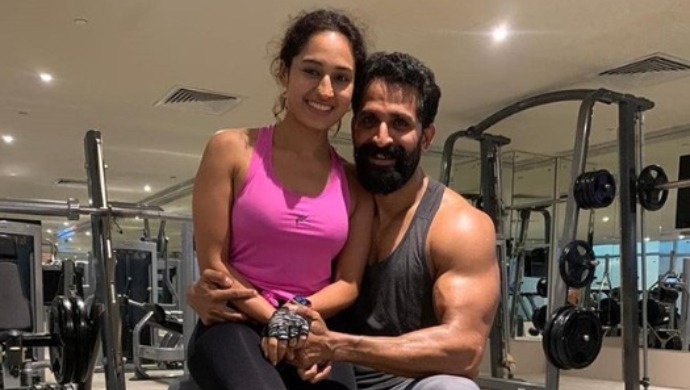 Anish John Kokken has been in the industry for far too long as one of the hottest actors! Hailing from Mumbai, the actor has invested most of his life working in the South industry. He has been part of several big-budget projects like Baahubali: The Beginning, KGF and more. He has an unforgettable personality and if you have watched Police Diary 2.0, you will know exactly why. The actor is hot and has a great physique. If you are wondering what makes his body such a treat to watch, you shouldn’t just follow his fitness routine but also pay heed to the fact that he works out with his wife!

Actors Anish John Kokken and Pooja Ramachandran, who got married last year, hit the gym together. Romantic as it sounds, John and Pooja’s fitness routines are actually a collaborative effort. The actor has even shared several clips of the same on his Instagram account. You can tell from the videos that the duo enjoys their workout sessions quite a lot.

Fitness is a lifestyle for them

Me and wifey @pooja_ramachandran keep posting workout videos regularly because our fitness journey isn't always about us… inspiring others along the way is just as important to both of us. We aim to inspire people…..we want people to look at us and say, "Because of you, I didn't give up". It isn't easy, you will get tired, your body will give up, your body will be sore every second day, but as long as your mind can go on so will your body. Mind over body – that's the trick. If we can so can you. Never give up. #mindoverbody #nevergiveup #fitnessmotivation #fitcouple #couplegoals #fitcouplegoals #trainhard #traineveryday #f45neelankarai #f45training #actors #actorslife #inspire #fitnessjourney #fitnessjunkies #fitnessfreaks #fitnessfanatics #functionaltraining #bodyworkout

The two have dedicated much of their life to acting and fitness. Delving further into details of the same, the actor revealed that he has been training for the past 23 years while Pooja has been involved in it for the past 14 years.

Get yourself a gym buddy too!

Training at @f45_neelankarai . Fitness is a lifestyle and you need to work on it every single day. Me and @pooja_ramachandran have taken years to reach this level of fitness. I have been training since 23 years and Pooja has been training since 14 years. We all started at ground zero and if we can do it so can you. #actorslife #f45neelankarai #f45training #f45empire #fitcouple #couplegoals #fitcouplegoals #fitnessfreaks #fitnessjunkies #fitnessjourney #pushyourself #beunstoppable #nolimits #trainhard #traineveryday #focus

‘The couple that works out together, stays together,’ seems to have become the new mantra followed by folks. In the video above, John has mentioned how Pooja is quite strong and tough when it comes to workouts, which actually makes the training a fun experience.

Burning calories in the gym with my one and only workout buddy @pooja_ramachandran . It's fun training with Pooja because she is equally tough, mad and stubborn during her workouts and we both end up pushing and motivating each other every single day. #f45piston #actorslife #couplegoals #fitnessmotivation #fitcouple #fitcouplegoals #soulmates #workoutbuddy #fitnessfreaks #fitnessjunkies #f45training #f45transformation

One of the reasons that John and Pooja continue to share posts and clips from their workouts is because they want to inspire people to hit the gym and engage in some kind of fitness routines. In fact, when you’ve got a workout buddy, you are motivated to go for it.

John Kokken and Pooja Ramachandra tied the knot in April last year when they celebrated Vishu as well, in Kerala. Ever since they started dating, John and Pooja were quite vocal about their relationship and made it very public on social media. The couple had a very simple and beautiful wedding and John took to Instagram to break the news. He captioned his post as, “On the auspicious occasion of Vishu this year on the 15th of April 2019, I married my best friend, my mallu girl @pooja_ramachandran in true Kerala style. Our journey begins…. #love #happy #bestfriend #mallucouple #marriage.”

On the auspicious occasion of Vishu this year on the 15th of April 2019, I married my best friend, my mallu girl @pooja_ramachandran in true Kerala style . Our journey begins…. #love #happy #bestfriend #mallucouple #marriage

John Kokken stars in ZEE5 original series, Police Diary 2.0. The action-packed series brings together skilled agents who form a special task force, to tackle crimes that have gone rampant in the state of Tamil Nadu. The series follows several heinous crimes and has been inspired by some true events of crimes that have taken place in the past. Intriguing and gritty, the show also stars Anjana Jayaprakash, Santhosh Prathap, Vincent Asokan, Pooja Ramachandran, Mohan Balaji and more.

Blurred Lines Between Dreams And Reality, How Will Vicky Get Out Of The Circle Of Drugs?