Prabhu To Accept Sathya’s Proposal Before She Undergoes Surgery?

Today, after Sathya requests Prabhu not to make her wait too long, Amul Baby makes her bloom with joy by accepting her proposal. 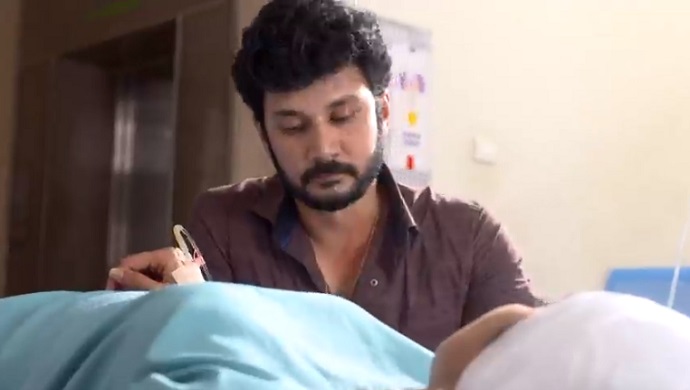 Fans of Sathya, who have been eagerly waiting to see her and Prabhu together, will have a reason to smile after watching tonight’s episode. Prabhu cannot see even a stranger in pain, then how can he be rude to someone he considers his best friend? Though you may have had the desire to see Prabhu proposing to Sathya voluntarily, however, you will be happy with Amul Baby’s gesture tonight.

Today, after Sathya requests Prabhu not to make her wait too long, Amul Baby makes her bloom with joy by accepting her proposal. The three magical words – I Love You – uttered by Prabhu, make Sathya feel blissful, and she proceeds to the operation theater wearing the widest smile. But there’s trouble for Prabhu. Divya, who reaches the hospital to see how critical Sathya is, overhears Prabhu accepting her sister’s proposal.

How will Divya react after seeing her fiance professing his love to her sister? For the unversed, here’s a quick flashback to the story. Prabhu gets engaged to Divya after his family Guruji approves of her horoscope. But Divya lies to them by producing Sathya’s horoscope and saying that it is hers. The Guruji has doubts regarding the same and feels Divya’s conduct doesn’t reflect the characteristics mentioned in the horoscope. Moreover, Sathya, who cheats on Prabhu with her boyfriend Bala wishes to marry the latter. Sadly, Prabhu has high regards for Divya but isn’t aware of the fact that she is Sathya’s elder sister. He is serious about taking his relationship further with Divya, but she has intentions to dump him for Bala.

However, Divya will reap what she has sown. Bala, who according to Divya, is a rich man’s son, isn’t aware that he is a fraudster. Bala keeps his real identity under wraps to marry Divya. Now, how will things unfold hereafter?
Stay tuned to this space for the latest updates on the show and for more entertainment, watch Piriyadha Varam Vendum, on ZEE5.

Sa Re Ga Ma Pa Seniors Season 2: Competition To Get Tougher With Judges Challenge Round

Yaaradi Nee Mohini: Swetha Volunteers To Do The Puja For The Well-Being Of The Village