Chaitra recently shared a pic of hers on Instagram which shows her flaunting her adorable looks in a traditional avatar. 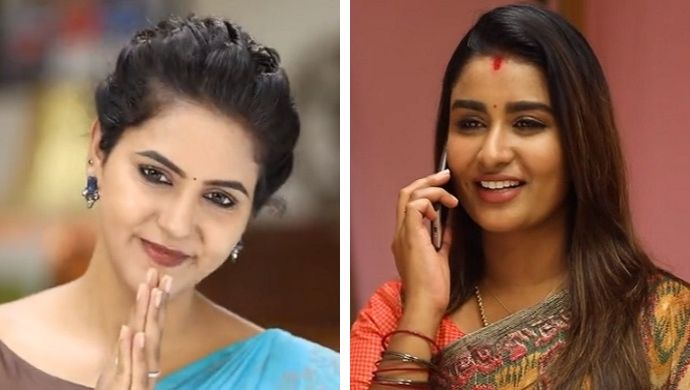 Actresses can be best friends and there can be no cat-fights between them. Reshma Muralidaran and Chaitra Reddy prove the statement above. Chaitra Reddy, who plays Swetha in Yaaradi Nee Mohini and Reshma Muralidaran, who essays Shakthi in Poove poochoodava, belong to the mutual admiration society and we have proof.

Watch the latest episode of the show below!

Chaitra recently shared a pic of hers on Instagram which shows her flaunting her adorable looks in a traditional avatar. Reshma loved her look in the pic and wrote: “Awww i love this look”. Chaitra, was quick to reply to the comment. She wrote: “@reshma_muralidaranthank you much sweetie”

For the unversed, Chaitra essays the main antagonist in supernatural daily soap Yaaradi Nee Mohini co-starring Shreekumar (as Mutharasan) and Nakshatra (as Vennila). The show revolves around Swetha’s obsession for Mutharasan and her madness to get married to him by hook or crook. While Reshma plays Shakthi, the female lead in Poove Poochoodava which has Karthick Vasudevan as the main lead. The show narrates the unusual love story between Shiva and Shakthi, who get married involuntarily. However, eventually they realise that they can’t live without each other.

Though Swetha plays a negative character, Yaaradi Nee Mohini, focuses on the dirty plans that she hatches to undermine the importance of Vennila in Mutharasan’s life. Whereas Shakthi, has finally got an opportunity to bond with her husband, Shiva, who has hired a detective to know who his real enemy is.

Both Chaitra and Reshma are quite popular on social media and have a huge fan following. What do you like the most about Swetha and Shakthi? Let us know by leaving a comment in the box below and for more entertainment, watch Sathya, the love story of a tomboyish girl.

Will Sathya Muster The Courage To Propose To Prabhu On Her Birthday?

Mitta Describes The Modern Youth And Their Conflicts In The Most Realistic Way, Here's How