The common perception of twins siblings is that they are extremely attached emotionally. However, Anuradha and Abirami poles apart. 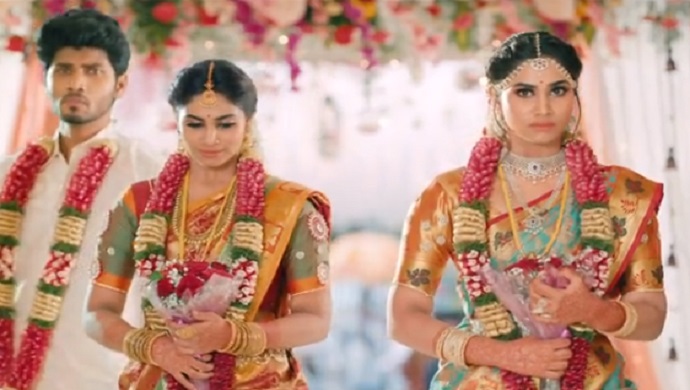 Aren’t siblings meant to be with each other through thick and thin? Well,  it doesn’t stand true in many cases. More than ‘revelry’, there’s room for rivalry, and it may seem hard to digest. Most parents often get concerned about their kids who have nothing hatred for each other. Rettai Roja, the brand new Tamil show will narrate the tale about identical twin sister’s who have nothing in common apart from their appearance. In straightforward words, they are poles apart.

The common perception of twins siblings is that they are extremely attached emotionally. However, as far as Anuradha and Abirami are concerned, it is difficult to believe that they shared the same womb. In this web-post, we will take a look at the reasons to watch the daily soap which launches on August 12…

Anuradha’s hatred for Abirami is astounding. The promo of the show reveals that Anuradha, the elder sibling hates Abirami. It would be interesting to know why there’s so much bitterness in Anuradha’s heart for Abirami.

Unlike twin siblings, who almost mirror each other, Anu and Abi are diametrically opposite. There’s nothing beyond their appearance that’s common between them. Anu is outgoing and bold while Abi is submissive and reserved. Are you wondering what makes them so unlike each? Stay tuned to ZEE5 to watch the show to get the answer.

We have seen actors essaying a double role on celluloid. However, this concept is relatively new to the small screen. It would be interesting to see how the makers have used technology to show the same actress essaying two different roles in a single frame.

Shivani Narayanan plays the lead roles in the show. Both characters are diverse. You must watch Rettai Roja to see the efforts made by Shivani to essay Anuradha and Abirami. We are sure that it must have been challenging for her as an actor to switch to different characters for the same show.

And last but not least, Anuradha doesn’t wish to be in contact with her sister after marriage, but destiny makes Abirami get married into the same household. Now, what will Anuradha do?

Rettai Roja will go on air on from August 12 from Monday to Friday at 2 pm. You can also watch the show on ZEE5.
For more entertainment, watch Piriyadha Varam Vendum, a show starring Vimal Venkat and Madhumita in the lead roles.