This musical event was held for a cause - to raise funds to support the nation-wide fight against the novel COVID-19 pandemic. 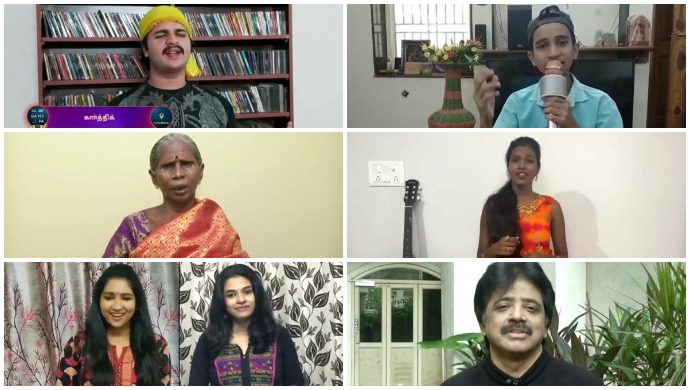 We all know that Sa Re Ga Ma Pa has been one of the oldest running singing reality show that has contributed to India’s culture and music scenario. As the show crossed its 25-year milestone this year, ZEE TV held an event on Sunday (May 24, 2020), a livathon and a virtual concert titled Sa Re Ga Ma Pa Ore Desam Ore Raagam, to mark the occasion.

Sa Re Ga Ma Pa Ore Desam Ore Raagam was a gala affair. While the country is in a lockdown, the channel made sure to entertain its audiences; and at the same time raise funds for the underprivileged affected by COVID-19.

The Sa Re Ga Ma Pa event was a one-of-a-kind multi-regional music fest. While it included over 350 performances by well-known singers, the 25-hour music marathon was streamed on Facebook, and the musical concert was aired on ZEE TV and 18 other ZEE channels.

Speaking of the Tamil part, the Live-a-thon started with Archana Chandhoke greeting and guiding us through a magical evening. The Live event had segments like Morning Energiser, Goosebump Round and Fusion Battle, where we saw the singers performing from their respective homes; entertaining us while they send out the message – Stay Safe. The former contestants, runner-ups and winners first shared their best memories of Sa Re Ga Ma Pa series before they began crooning our favourite tracks.

In the morning energisers segment, we saw Arun Prakasam crooning Yen Aala Paakkaporaen. Our Rockstar Kamalesh enthralled the audiences by singing to Rajinikanth’s Mass Maranam. A duet by the supremely talented individuals and the winners of previous seasons, Varsha and Sukanya, filled the day with soulful melodies.
Jangan and Sharmili gave us a glimpse of perfect melody with their song, Malare Mounama. With Rockstar Ramaniammal rendition of Paarvai Raniyin Pakkam song, we witnessed magic.

During the Live and the concert, we saw celebrities (Sathya’s Prabhu, Oru Oorla Oru Rajakumari’s Ashwini) and renowned singers (Srinivas, Sujatha Mohan). They asked the interested people to donate during the Live-A-Thon to GIVEINDIA (a trusted platform) via an active ‘Donate’ link.

After Live-a-thon, the channel held a concert later in the evening, which also aimed at entertaining its ardent viewers with some stunning performances and create awareness to raise funds for the ones who are affected by the pandemic.

Arya Anand, Rockstar Kamalesh and Lil Champ’s winner Viswa Prasad also impressed us with their mesmerising performances. Kamalesh was also seen dancing in style as he crooned Anirudh Ravichander’s Mass Maranam. We also saw a cute moment amongst Sa Re Ga Ma Pa Seniors, when Archana tried to teach Gurbinder Singh, ‘how to greet the viewers and ask them to stay safe in Tamil’.

If you missed the Livathon or the concert, scroll up to watch the musical extravaganza. Also, the channel has made the performances available on ZEE5.

This musical event not only reconnected the artists across the country but also unlocked the power of humanity. We are sure that this magical music fest helped all of you rise above the gloom of the global pandemic.