Assam girl, Krishangi, cast a spell with her magical performance and impressed everyone on the sets of the show. 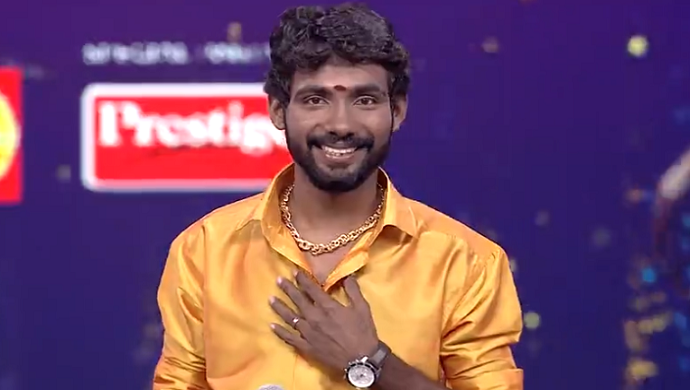 The folk music round continued on Saturday, and it opened with Arul Prakasham’s soulful performance. Special guests Rachitha and Dinesh enjoyed the musical evening and so did guest judges Chinna Ponnu and Velmurugan. Arul Prakasam bagged the Golden Performance crown and thus, the evening began on an enchanting note. The second contestant of the evening, Chandan Gupta, who hails from North India, garnered appreciation for his attempt to sing a Tamil folk song. Nepoliya, who followed Chandan, bagged the Golden Performance and the honour of the headgear from Srinivas Sir and Velmurugan.

Assam girl, Krishangi, cast a spell with her magical performance and impressed everyone on the sets of the show. She bagged the golden performance crown for singing the Tamil folk song to perfection.

On Sunday, the contestants had a new challenge at hand, and they had to sing while grooving to their song. The Judges asked the contestant to sing without the fear of facing evicted because there would be no elimination at the end of the episode.

Reshma began the episode with a bang and made the judges give her a standing ovation by rocking the stage. She bagged the golden performance. Prakash followed in the steps of Reshma to win the gold. It continued to rain gold after Mrithul’s performance. It did not stop there, Lakshmi bagged the gold once again.

For the unversed, Sa Re Ga Ma Pa Seniors Season 2 hosted by Archana Chadhoke has veteran singers Srinivas, Sujatha and Vijay Prakash as the judges. The show also has an esteemed panel of jury. If you are a fan of Bollywood music, check out the videos on ZEE5.

5 Things We All Can Learn From Shiva Of Igloo