To make the evening more enchanting, folk specialists Chinna Ponnu and Velmurugan joined the judges to share their expert opinions. 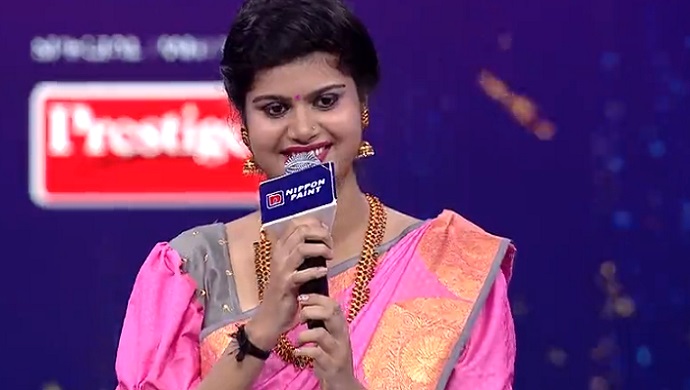 As expected this week’s Sa Re Ga Ma Pa Seniors Season 2 was full of mesmerising performances. Archana Chandhoke opened the episode by dancing to a peppy folk song, and everyone on the sets – from the judges to the jury and the contestants looked resplendent in traditional attire. After all, it was time for folk music to resonate in the ears of the viewers. And to make the evening more enchanting, folk specialists Chinna Ponnu and Velmurugan joined the judges to share their expert opinions.

Aishwarya was the first contestant to perform, followed by Reshma. Janagan impressed the judges once again by delivering a Golden Performance. Later, it was time for Lakshmi, who specialises in signing folk songs to showcase her prowess. Her splendid performance helps her bag the Golden performance tag and also a special honour from the guests – Chinna Ponnu and Velmurugan. Saravedi Saran cast a spell once again.

On Sunday, Prakash opens the episode and garners appreciation followed by Laavanya. Devanandha gets appreciated by judge Srinivas, and she succeeds in getting blessed by Chinna Ponnu and Velmurugan. She becomes the first contestant of the evening to win the Golden Performance crown. And as expected Sukanya stole the hearts of the judges once again. She became the second contestant of the evening to bag the honour of delivering the Golden Performance.

Mridhul did well, but it was Aslam who impressed the judges by delivering a flawless performance. And it rained gold soon after he displayed his prowess. Last but not least, Karthik concluded the episode by grabbing gold once again. Who was your favourite? Let us know in the comments below!

For more entertainment, watch Sathya, the love story of a tomboyish girl, on ZEE5.

Yaaradi Nee Mohini: Mutharasan To Know Swetha Played A Game To Convince Him For Marriage