Laavanya, the girl with a powerful voice, began Saturday's episode by displaying her versatility. 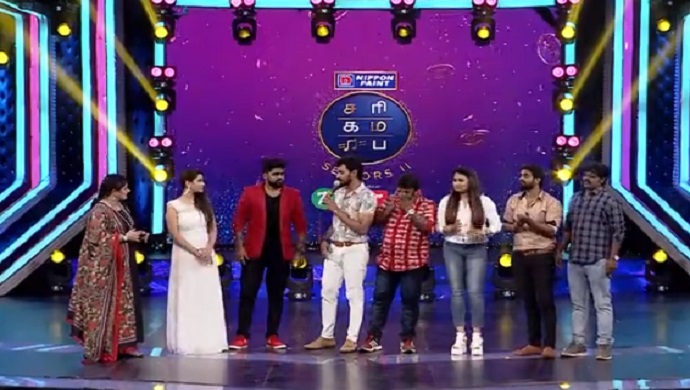 The Saturday episode of Sa Re Ga Pa Ma Seniors Season 2 opened with Archana Chandoke thanking special guest Abdul Hamid for his esteemed presence. In a while, Laavanya, the girl with a powerful voice, began the episode by displaying her versatility. The judges appreciated her performance, and she ended up bagging the Golden Performance tag. After Laavanya, Sri Jeyanth showcased his singing skills, but owing to an illness, he failed to score the desired score. Lakshmi was heaped with praise for keeping the essence of folk music alive, though technically she went wrong a couple of times.

Later, Sukanya left the judges and the special guest spellbound by her performance and bagged the Golden Performace tag. After Sukanya, one of the most popular contestants, Saravedi Saran made his presence felt by singing a rustic song. His life experience was shared during the episode in the form of an audio-visual presentation that showed his friends and his mother talking about the efforts he puts to make ends meet. The video proved that Saravedi Saran is a winner in the truest sense.

After Saravedi Saran, Krishangi delivered a spellbinding performance and grabbed the Golden Performance tag and so did Vikram. Vaishnavi impressed the judges by singing a song from the film Bombay and the episode concluded with Chandan Gupta’s performance. Chandan bagged the Golden performance tag by singing the iconic Thaiya Thaiya song. Gopika, Soundarya, Sabari and Athishya entered the danger zone. In the end, only Athishya got saved while the remaining three contestants get eliminated.

On Sunday, the musical extravaganza continued in the presence of the TV stars of Zee Tamil. Vikram opened the episode who sang a song featuring Senthil and Goundamani. He bagged the Golden performance tag by impressing the judges. Reshma also did complete justice to the song she sang and bagged the Golden Performance Tag.

Prakash followed Reshma but he was asked to practice more so that he could deliver better performances in the times to come. Karthick rocked the stage once again and won the Golden Performance. He impressed the guests on the show by his singing skills and his innocence while Nepolea was asked to focus more on the finer nuance of singing. And in the end, Janagan missed the Golden Performance tag by a fraction while Athishya Jain entertained the audience by his singing.

Who is your favourite singer of Sa Re Ga Ma Pa Seniors Season 2? Let us know by leaving your comment below. And if you like listening to Indipop, check out the videos streaming on ZEE5.

Yaaradi Nee Mohini: Will Mutharasan And Rudra Get Trapped By The Occultist?