Sukanya bagged the Golden Performance tag for her captivating performance. 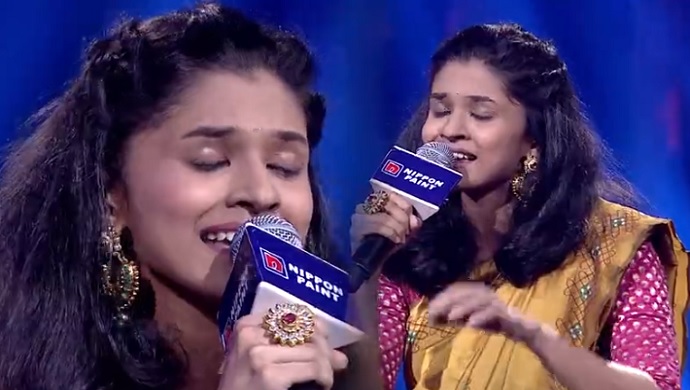 The Season 2 of Sa Re Ga Ma Pa Seniors has talent in abundance. The show hosted by Archana Chandoke is one of the top shows on the Tamil television space and no wonder why it is so popular. Melodious voices from across the state and far, have been chosen for the TOP 21. Among the many contestants who have left not only the judges and the jury but also the viewers spellbound, Sukanya finds a special mention.

Here’s sharing one of Sukanya’s performances that will drive away your midweek blues. Check it out here:

The original song is from the film Aayudha Ezhuththu is penned by Vairamuthu, sung by Madhushree and composed by Oscar Award Winning music maestro AR Rahman.

Sukanya bagged the Golden Performance tag for her captivating performance. The judges heaped praises on her for flawlessly pulling off the performance while special judge Abdul Hamid even went on to compare her voice to Madhushree’s. And Sukanya had all the reasons to be thrilled.

Sa Re Ga Ma Pa Seniors Season 2 is judged by veteran singers Sujatha, Srinivas and Vijay Prakash. The show has a panel of a jury also. The reality show that aims at giving fresh talents a platform to showcase their singing prowess is aired on Saturdays and Sundays at 6.30 pm on Zee Tamil. You can also follow the show on ZEE5.

Who is your favourite contestant this season? Let us know by leaving your comments below. And if you are a fan of Bollywood Punjabi music, check out the videos on ZEE5.