Sathya doesn't know how to drape a saree, so Prabhu pitches in. 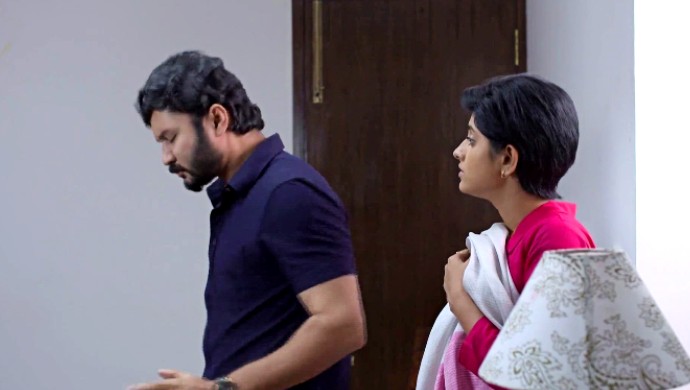 In the previous episode, we saw Sathya is not the type to take things lying down. She ticks off Anita when the latter starts abusing her before her first night and tells Prabhu’s sister to stand down. The next morning, when she comes to the bedroom, freshly bathed and dressed and bearing a cup of coffee for her husband, Prabhu refuses to wake up and have the coffee. So she throws it in his face. She also smears kumkumam on his face so when he goes out of the room, he gets berated by his family, who think this is a result of their first night. Later Sathya explains to him that even if the two of them are not happy, at least the rest of the family is happy thinking that they have normal marital relations.

In the upcoming episode today, Sathya and Prabhu have a funny moment when Prabhu helps her tie her saree. Refusing to look at her while she is tying her saree, he turns around in the other direction and puts together the pleats and folds. Sathya teases him saying that he might as well turn and look at her while tying it for her. Will this episode gradually change Prabhu’s feelings for Sathya? To find out, watch the series on ZEE5.

3 Reasons Why Sembaruthi's Adithya Is The Best Husband