Sathya has been given a task to demonstrate her abilities as a good daughter-in-law. However, Anita hatches a plan to ruin her chances of success. 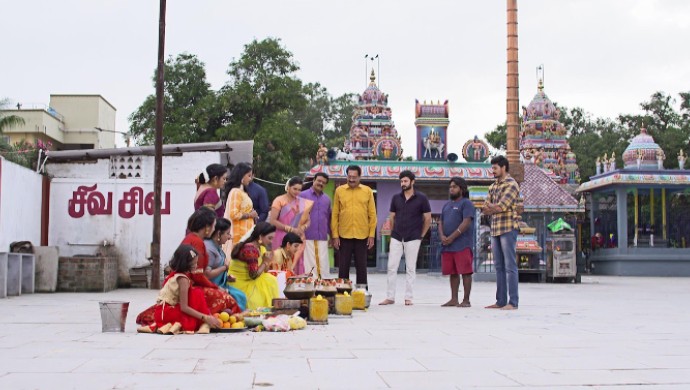 In the previous episode we saw that Sathya introduces Prabhu’s family to the old man who predicted her marriage and Prabhu gets a shock. He realises that this is the same old man who told him that he would not get the woman he wants. At that time, the old man had gone on to say that his future wife would be more like Bruce Lee and he would get beaten up all his life. Annoyed that what he predicted came true, Prabhu looks angry when the family asks him to take blessings from the old man. However, the old man, realising what Prabhu was thinking, mollifies him by assuring that however much his marriage may seem a little rough around the edges, he has still married somebody who is very loving and caring.

Missed watching the previous episode of Sathya? Catch it here.

In tonight’s episode, we will see the family asking Sathya and Anita to make pongal in ponga-paanai in the temple. And Sathya, as the new daughter-in-law, was expected to have her pongal boiling and bubbling over, to symbolise prosperity and good fortunes for the family. However, Anitha has other plans. She tells her husband quietly that she has done something to ensure that Sathya’s pongal will not boil over. What are Anitha’s plans? Will Sathya be able to overcome it? To find out, watch Sathya tonight on ZEE5.

For more such entertainment, watch Iniya Iru Malargal, the eternal love story of Abhi and Pragya, now streaming on ZEE5.

Watch ZEE5 Original Series Thiravam, A Thriller Set On The Life Of A Scientist Who Invented An Herbal Fuel