As Kathir and Soumya hold hands in public, Anita spots them and is not happy with the sight. What will she do? 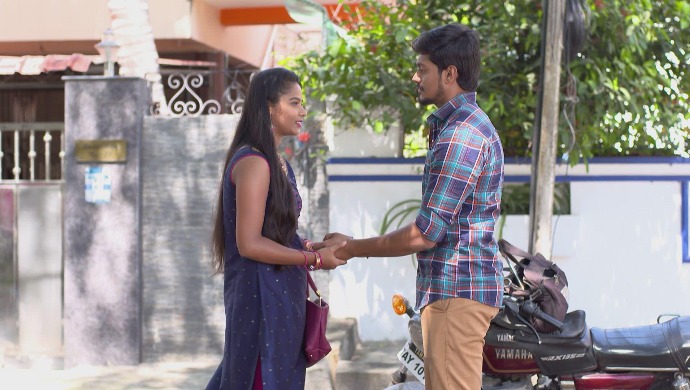 In the previous episode, Prabhu is happy as he has managed to pacify Sathya and finds himself in her good books again. The next day, Chithappa is trying to crack a contract with illegal measures and requests Prabhu to sign the documents. Stating that he has already read the documents, he asks Prabhu to just sign them. However, Sathya intervenes and stops him from blindly signing a document without reading them first. Even Prabhu’s mother supports Sathya and asks him to read the papers. As Prabhu does the same, he realises that the deal is going to incur losses and hence, refuses to go ahead with it. Later, Anita and her husband try to irk chithappa against Sathya for the failed deal.

Tonight, Prabhu thanks the security for giving him the idea of halwa and flowers. He states how the idea worked really well and helped him get on better terms with his wife. Sasi tries to find out what is going on between the two but Prabhu asks him to stay out of his cabin. It is hilarious how Prabhu doesn’t entertain Sasi despite all his efforts. Later, Chithappa is sitting in the living room area along with Anita and her husband. He asks his wife to get some hot beverages for the folks. As she is heading down to get them, Sathya comes up with a tray of beverages.

Chithi is impressed by Sathya for being aware of what the family requires and their schedules. Sathya serves them to Chithappa but he pretends to drop the cup. He asks his wife to get another one while Sathya rushes to get a rug and clean the floor. Once she returns, Chithappa reveals that he actually dropped the cup on purpose. He further adds that Sathya should know her place and not try to poke her nose in places where she doesn’t belong. With that, he finally calls her a beggar and leaves. Anita takes this moment to make fun of Sathya for what has happened. However, she actually gets mocked by Sathya, who calls her a pig instead.

Kathir receives a call from someone to fix a scooter. He does as told and the girl hands him a Rs. 2,000 note. He does not have change for it and asks her to wait so that he can get the remaining money. However, the girl is in a hurry and states that he should just keep it. Kathir then states that he is no beggar and he would rather let her keep the money instead. She then turns to a tree and says that she cannot keep up the act anymore. Kathir turns to the tree and Soumya peeps from behind it. She walks up to Kathir and her friend and states that she has been trying to give him money but he refuses to take it. They then hold hands as they state how much they miss each other when Anita’s car passes by and she witnesses everything. Will Anita tell Chithappa about it or will she take matters in her own hands? Stay tuned!

Sneha Prasanna Looks Angelic In Her Pregnancy Photoshoot - Check Out Her Pictures!