After noticing Kathir return to his life as a mechanic, Prabhu decides to hire him as a full time accountant and a personal tutor to Soumya. 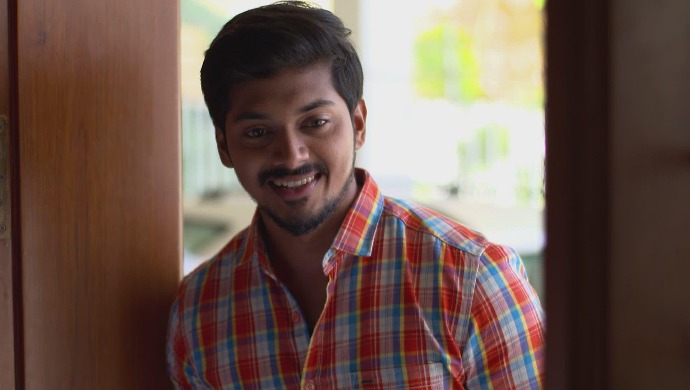 In the previous episode, after Anita eggs chithappa on to do something about Sathya, he decides to let her know her place in the house and in life. He drops the coffee made by her and later as she is cleaning the floor, chithappa tells Sathya how all she is capable of is cleaning up other people’s mess. However, Sathya is unfazed by the insult as she goes ahead and calls Anita a fair-skinned pig. Later, Soumya tries to give Kathir some money through her friend. But he refuses to accept the huge sum, which makes her come out from hiding and state that she is the one who tried to give him cash. Kathir then states that just because her father is making his life difficult, she doesn’t have to worry much. He holds Soumya’s hand but just then, Anita and her husband notice them.

Tonight, Anita flares up at the sight of Kathir and Soumya holding hands. She instantly rushes to them, pulls Soumya to her side and slaps her. Anita then insults Kathir and drags Soumya along with her while he stands there, feeling helpless. Back at home, Anita calls out chithappa and chithi and tells them about Soumya and Kathir. They throw a big fit over Soumya’s relationship and how she is not scared of the consequences or of anyone in the house. Just then, Sathya walks in and notices how everybody is ganging up on Soumya. But the minute she arrives, they all keep quiet and don’t say a word.

Sathya is certain that something is fishy and instead tries her best to intervene. She asks about Soumya countless times which irks Anita. They then take her to a room and try to reprimand her. Anita’s husband suggests that they should wipe out Kathir’s entire family. Soumya gets upset and threatens to call the cops on her family if anything happens to him. This bothers everyone in the family and just when they are about to attack her, Prabhu’s mother walks in. She then asks for Soumya and takes her away. Later, Prabhu’s mother tries to find out why they have been ganging up on her. Since she is not supposed to say anything about her affair, Soumya lies about her studies being the reason.

Prabhu is on his way back home when he notices Kathir fixing motorcycles. He gets down and has a conversation with Kathir when he learns that his tuition class had to be shut down. Prabhu doesn’t wish to see Kathir do such mechanic-related work and asks him to come home the next day. After reaching home, Prabhu informs Sathya that he met with Kathir and how he had to stop the tuition class due to some issues. Hence, he has decided to hire him in the business for his accounts expertise. Sathya is happy to hear this and supports Prabhu’s decision.

The next day, Kathir arrives and shocks everyone in the house. Prabhu announces that Kathir is being hired to be the new accountant, with the intent of reducing chithappa’s workload. In fact, Prabhu also states that Kathir can teach Soumya at home since her parents complained about her tuition class being too far. Chithappa has no option but to remain silent through all this. Meanwhile, Soumya notices everything and is super happy.

Preview for the next episode: The cook packs a lunch case and keeps it on the table when Sathya asks if everything else is ready. She then heads outside to check if the car has arrived when Anita sneaks into the dining area with some devious plan in mind. What does she plan to do now? Stay tuned!

Why Has A Spirit Possessed Trisha In Mohini? Find Out Right Here

If You Plan To Make A Playlist For Your Bae, Make Sure To Add These Beautiful Love Songs!