With a view to humiliate Sathya and deteriorate her relationship with Prabhu, Anita decides to swap the food prepared by her. 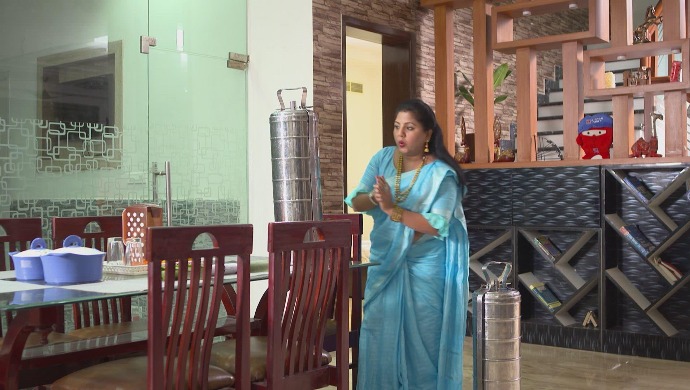 In the previous episode, Anita drags Soumya away from Kathir and slaps her. She then takes her home and creates a big scene about it in front of chithi and chithappa as Soumya’s behaviour is unacceptable. Sathya notices that the four adults are trying to hide something regarding Soumya from her. On the same day, Prabhu notices Kathir working as a mobile mechanic. He meets him and reprimands him for not continuing at the tuition class. Kathir explains how the landlord sold the plot and hence, he had to leave the class. Prabhu decides to give him a job in his company as an accountant. Chithappa is not too thrilled by the idea but has no choice.

Tonight, Prabhu announces that Kathir can also take some time off during his work and tutor Soumya. This further angers Chithappa and Anita as they just schooled Soumya to stay away from Kathir. After stating his decision, Prabhu leaves and Kathir is left with a smile on his face. He thanks Chithappa for this opportunity. Kathir states that because he got rid of the tuition class, Prabhu noticed him on the street and offered him the job at their business. Chithappa holds his collar and threatens him to remember his place.

Just then Prabhu arrives and asks him to come upstairs as he should meet Sathya. Kathir smiles again and heads upstairs to meet her. In their room, Sathya is sarcastic as she greets Kathir and he feels bad due to her behaviour. Just then, Prabhu arrives and appeases both of them. Meanwhile, Anita tells Chithappa that Kathir’s presence in their life is all Sathya’s doing. They should get rid of her and only then will they be able to drive away Kathir as well.

Next day, at the dining table, Prabhu states that some clients from Mumbai are coming down and would like for some sumptuous South Indian food. Hence, he requests his mother to cook the food for them. However, Sathya reminds him that since his mother is unwell, she will take up the responsibility of cooking food by watching videos on YouTube. Prabhu is not very sure, neither is his mother. But they both agree to Sathya cooking the food as she seems very confident and proactive. Anita overhears everything and tries to mess up the food. She tries to add some extra spices and condiments in the dishes but is unable to find anything in the kitchen.

Sathya surprises Anita and informs her that she won’t find the condiments and spices as she has hidden everything to avoid the mess that she’s trying to create. She packs the food and asks the cook to keep it on the table so that they can take it to office. Just then, Anita decides to swap the food box with her boxes, which comprise of shoes and rubber.

Preview for the next episode: Anita is delighted knowing that her plan might work, when her husband announces that he too swapped the food dabbas. Has her plan backfired? Will Sathya receive praise instead of insults from Prabhu? Stay tuned!

When Yaaradi Nee Mohini’s Vennila Had A ‘Dream Come True’…

Why Is Vetri Framing His Twin Brother Maaran For The Murder Of His Colleague?