Thanks to Anita’s husband intervening in her plan, Sathya ends up with the right food boxes, which she takes to Prabhu’s office. 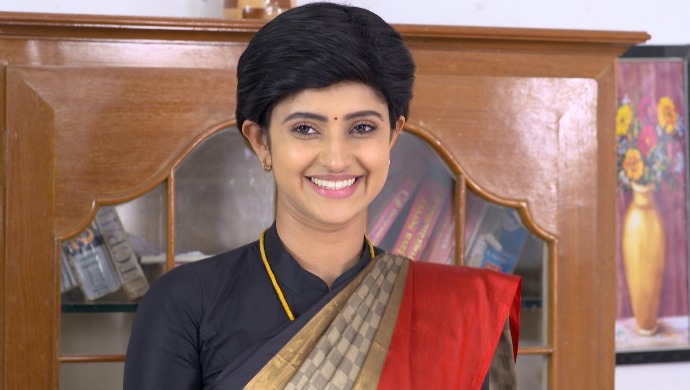 In the previous episode, Prabhu announces that he has some clients coming from Mumbai. Hence, he asks his mother to cook some South Indian food. However, since she is sick, Sathya volunteers to prepare the food for his clients. He is apprehensive as she has never cooked anything in her life. Meanwhile, Anita notices her cook and decides to meddle in her business by trying to ruin her food. In fact, when Sathya ensures that all the spices are hidden, Anita switches the dabba altogether.

Tonight, Anita manages to switch the dabba, which Sathya asks to be put in the rickshaw. As she is about to sit in it, Sathya realises that she forgot to carry the banana leaves for the lunch setting. Hence, she asks the rickshaw driver to wait for a bit. Right after she leaves, Anita gloats about how Sathya is going to return with tears in her eyes as she will be terribly humiliated. Before leaving, Prabhu’s mother tells Sathya that all the clients will relish her food as it has been prepared really well.

The meeting with the clients comes to an end and they are about to leave when Sasi brings up the subject of lunch coming from Prabhu’s house. Prabhu is apprehensive of serving them Sathya’s food as this is her first attempt at cooking. However, Sasi has full faith in her and tells Prabhu that she will surprise him and everyone else too. Sathya arrives with food and when she opens the boxes, it has food and not shoes and other random pieces, as filled by Anita. The clients eat the food and rave about it. Even Prabhu has some and is shocked by how delicious the food is.

He thanks Sathya for preparing such good food and she blushes to no extent! Anita is waiting in the house for Sathya when her husband shows up and states that he did something that will make her proud. She asks him what he has done this time to which, her husband explains, that he switched the food from the rickshaw when Sathya went to get the banana leaves. Anita suspects that he probably took the food dabba and asks him about the same. They then realise that instead of doing something to humiliate Sathya, they actually did her a good and made Prabhu happy. Sathya reaches home with a big smile on her face and sings a song to flaunt her victory.