Sathya 14 December Preview: Sathya And Prabhu Have A Romantic Moment?

Sathya and Prabhu suddenly end up in a compromising position on the floor. Will this be the beginning of a new, beautiful relationship? Read on. 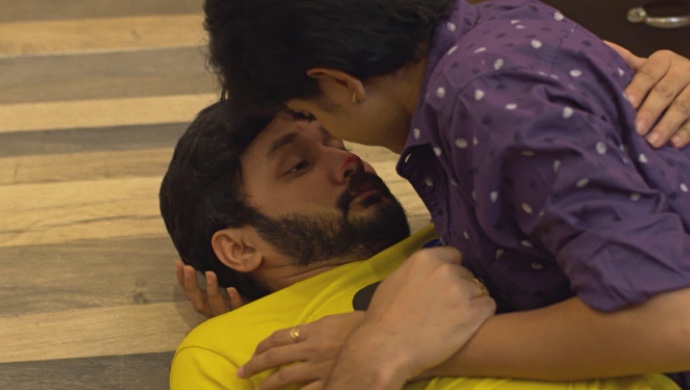 In the previous episode, Prabhu goes to office for a meeting in the face of his family´s apprehensions and objections about the state of his marriage. There he finds that his employees have thrown a party for him. It comes a shock to him when Sathya suddenly emerges with a group of people and starts dancing there. Turns out that this was a surprise that the employees had planned. To prevent any speculation about his marriage, Prabhu dances with Sathya. Later, however, he calls her to his cabin and yells at her for coming to his workplace. Sathya points out that it was he who called her and he gets angrier still, thinking that she is wriggling her way out of the situation. Just then Kullaboodham enters the room and clarifies that he made the call and lied to Sathya about Prabhu calling her. Prabhu slaps him and when Sathya protests, he tells her that he only slapped his friend because he is unable to slap his wife. He goes to tell her that his married life is nothing like he had dreamed of and living with her felt like hell. Upset, Sathya walks out and starts walking home. Prabhu later relents, chases her down in his car and insists on dropping her home. At home, Prabhu realises that Sathya has told at home that Prabhu called her to his workplace and his father now felt happier about his son going to work, thinking that their marriage is working out. Sathya later points out that this was her intention all along in telling her father in law where she was going so he would feel happy. Anita however, overhears all this and realises what´s going on.

In tonight´s episode, Sathya and Prabhu accidentally fall off the bed due to a mishap with a tumbler and Sathya ends up on top of Prabhu. They keep staring at each other in that position for a long time. Will this moment lead to something more? At the very least, will Prabhu behave more kindly towards Sathya? To find out, watch Sathya on ZEE5 tonight.