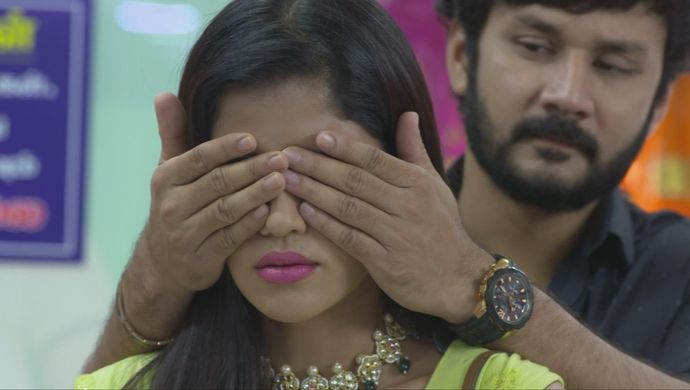 In the previous episode, we saw that Prabhu somehow manages to fool Sathya. At home, Divya and Sathya’s grandmother are contemplating Divya’s marriage and how things are not going as per plan. Divya somehow tries to convince her grandmother that they are just overthinking and that matching horoscopes is a thing of the past. At Prabhu’s office, a designer hands over Prabhu‘s invitation card to him and Sathya walks in. He stops her from seeing the names on the card by telling her that he wanted it to be a surprise for her. But she sees Divya’s name anyway and loses her cool.

In the upcoming episode, Divya will be at a store buying a saree and will be surprised to find out that it has already been paid for. She asks the salesperson who paid for the saree when Prabhu shuts her eyes with his hand to surprise her. She mistakes him for Bala and screams at him only to turn and see Prabhu standing behind her. But instead of being mad at her, Prabhu just smiles and raises his eyebrows in a mocking way. Will Prabhu take things forward with Divya or will he find out about her plans and her past? To know more, watch Sathya airing on Zee5 tonight.

For the unversed, Sathya is in love with Prabhu who is engaged to her sister, Divya. Sathya is unaware of the fact that he is engaged and assumes that she is in a relationship with him. Divya, on the other hand, ditches her boyfriend to marry Prabhu when she finds out that he is rich. For more such entertainment, watch Nachiyarpuram streaming on ZEE5.