Sathya 19 February 2020 Written Update: Will Prabhu Help Wife Sathya Get Out Of Jail?

Vinod gets Sathya arrested. Will Prabhu be able to help her get bail? Read to find out! 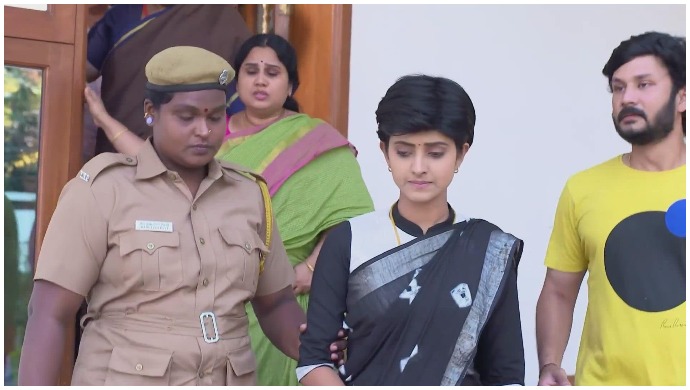 In the previous episode of Sathya, we saw Vinod laying a trap for Prabhu and Sathya. He arranges for a senior couple, who approaches Prabhu for help with unlocking the car, claiming that they’ve lost the keys. But Prabhu asks Sathya to help the couple while he goes to get his car. As Sathya helps the senior couple to open and start the engine without the keys, Vinod records the whole incident to use it against them. Meanwhile, Sathya’s mother gets worried as her son and daughter-in-law aren’t home yet. The following morning, Sathya’s mother and Patti visit Prabhu’s house to finalise certain details regarding the thali pirichi korkum ceremony, while Anita shows disapproval regarding the same as she does not want any ceremonies taking place in the absence of her father.

In tonight’s episode, Sathya’s mother and grandmother visit Prabhu’s house to discuss organising a ceremony for the couple. While Prabhu and Sathya’s mothers are fixing a date for the ceremony, Prabhu’s sister interferes and tells her mother to not organise any event until her father returns. But Prabhu’s mother rejects her suggestion and points out it will take almost six months for her husband to return home and it won’t be a nice idea to keep this ceremony waiting until then. Meanwhile, Sathya and Prabhu share a romantic moment in their room until the latter’s sister enters to inform that Sathya’s mother and grandmother are waiting downstairs for the two.

Looking at the camaraderie between Sathya and her mother-in-law, the relatives are very impressed. While they all share a laugh over this, the police enter the house to arrest Prabhu. The inspector accuses Prabhu of stealing Vinod’s car and important documents that were inside it. While Prabhu tries to defend himself, Sathya takes the blame and tells the police that it was she who stole the documents and not her husband. The police arrest Sathya for the crime. Meanwhile, Prabhu requests the cops to leave her, claiming that she is innocent. As all this takes place, Prabhu’s sister and his uncle take advantage of the situation. They plan to make sure that Sathya does not get bail until the end of the day and that way, she will be left behind bars until Monday.

Preview of the next episode: As Sathya is now behind bars, Vinod, who filed a false complaint against them, visits her in jail. Vinod wanted Prabhu behind bars but Sathya took the blame and is now in prison. Hence, Vinod tells Sathya that he made a mistake by underestimating her and is pretty much impressed with the twist she brought in. He further tells Sathya that his only aim is to destroy Prabhu’s peace and with Sathya being in jail, his purpose has been served.

What do you think about tonight’s episode? Will Prabhu be able to get Sathya out of jail? Share your thoughts in the comment section below. Also, watch 2018 Tamil thriller Diya starring Sai Pallavi and Naga Shourya on ZEE5.

How Will Pooja-Ashok's Presence Change The Dynamics In Yaaradi Nee Mohini?