The police does not allow Prabhu to meet Sathya, find out why! 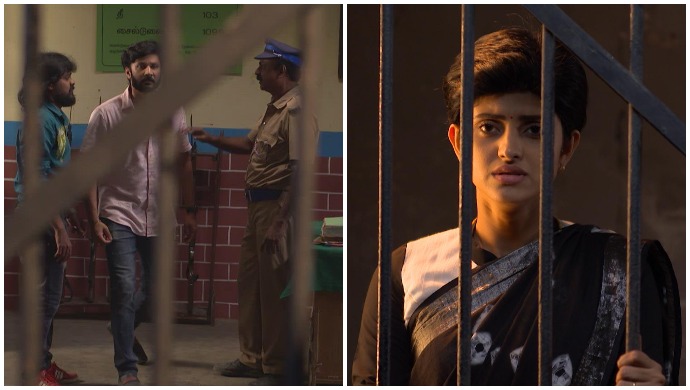 In the previous episode, Sathya overhears the inspector and lady constable’s conversation, where they talk about forcing a confession out of Sathya about a crime that she hasn’t committed. As she comes to know that the police is in favor of Vinod, she feels helpless. However, seeing Prabhu at the station, who has come to meet her, she feels content. They also click selfies at the station. Before leaving, Prabhu promises Sathya that he will somehow get her out of jail by the end of the night. As he leaves, he bumps into Vinod outside and loses his calm and hits him. Vinod threatens Prabhu, saying that he will put him behind bars too if he raises his hand on him ever again.

In tonight’s episode, Prabhu, who is unable to take Sathya out of the jail, goes to meet her at the police station in the night to talk to her. While the inspector is asleep, Prabhu tries to sneak in to meet Sathya but the constable, who notices Prabhu, stops him from meeting his wife and asks him to leave before the inspector wakes up. Disappointed, Prabhu leaves the station.

How Will Pooja-Ashok’s Presence Change The Dynamics In Yaaradi Nee Mohini?

What do you think about tonight’s episode? Will Prabhu be able to get Sathya out of jail? Share your thoughts in the comment section below. Also, watch 2018 Tamil shows and films on ZEE5.