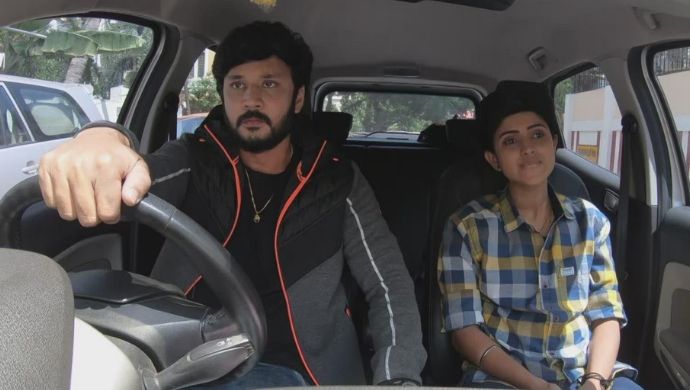 In the previous episode, Prabhu gets upset on finding out that Sathya can never forget him and he should give up trying. On the other hand, Divya finds out that Bala is a fraud and decides to teach him a lesson for trying to fool her. Later on, Prabhu goes to a Guruji’s house to show him the printed wedding cards and get him to bless it. That’s when Sathya also reaches the place screaming for Guruji. She finds a man unconscious on the street who later tells her that Guruji asked him to fast for her. She goes to question the God-man about why people fast to prove their devotion. Prabhu also hears her voice outside and is stunned.

In the upcoming episode, Sathya hides in Prabhu’s car and startles them when she suddenly asks them to switch on the AC. She then sits shotgun and asks Prabhu about his visit to Guruji’s house. Prabhu tells her that he doesn’t go there very often but only when his family members send him for something or if he is feeling too low. Sathya then asks him which one of these reasons did he visit Guruji now. Prabhu is perplexed and wondering what to tell her. Will he tell her the truth? Or will he make up an excuse? To know more, watch Sathya on Zee5 when it goes on air in the evening.

For the ones who have missed the last couple of episodes, Sathya is unaware of the fact that Prabhu is engaged to her sister, Divya and falls in love with him. Even though he tries his best to tell her the truth, something always makes him postpone it. Divya, on the other hand, ditches her boyfriend, Bala, on finding out that Prabhu is richer. For more such entertainment, watch Iniya Iru Malargal streaming on ZEE5.

Yaaradi Nee Mohini 21 October 2019 Preview: Will Swetha Find Out The Truth About Guruji?