As the police does not allow Prabhu to meet his wife Sathya, he punches him on his nose. 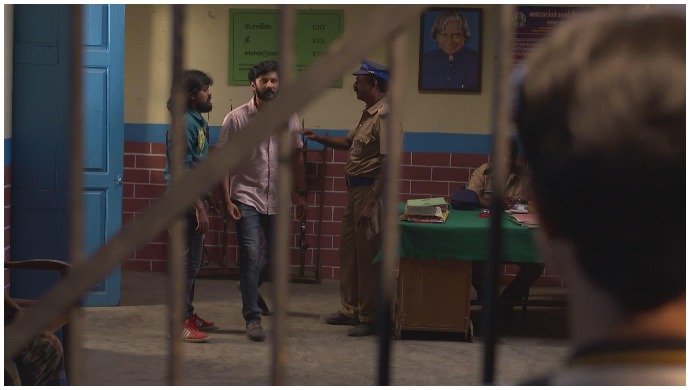 In the previous episode, Sathya challenges Vinod that she will somehow get out of jail but he is the one who needs to be prepared to go behind bars. On the other hand, Prabhu requests Vinod to get Sathya out of jail. He tells him that he will do anything for it. And Vinod commands Prabhu to fall on his feet and allow him to click a picture of the same as to frame and hang it in his office. He wants people to think that Prabhu fell on his feet and begged to become the top businessman and Vinod did him a favour. While Prabhu gets ready to do it for Sathya, his friend does not allow him to do it. Later, Prabhu goes to meet Sathya at the police station but a constable refuses to allow him to meet her in the absence of the Inspector.

In tonight’s episode, Prabhu returns home without Sathya. And when his mother and mother-in-law ask him about Sathya, he tells them that he will get her out of jail tomorrow. But his mother tells him that they cannot let Sathya stay the night in jail and asks him to get her now. So, once again, Prabhu goes to the police station to meet his wife but the constable again asks him to leave.

On the other hand, a lady constable, who feels bad for Sathya, gives her the phone to let her make a call to her husband. After Sathya speaks to Prabhu on the phone, he feels better but he still attempts to request the constable to allow him to meet his wife. He also tries to bribe the police but he still does not get convinced. So, Prabhu hits the cop in his nose.

What Does Sathya Teach Us About True Friendship?

5 Reasons Why You Should Watch Sasikumar And Mia George's Vetrivel