Find out if Prabhu manages to get Sathya out of jail or not. 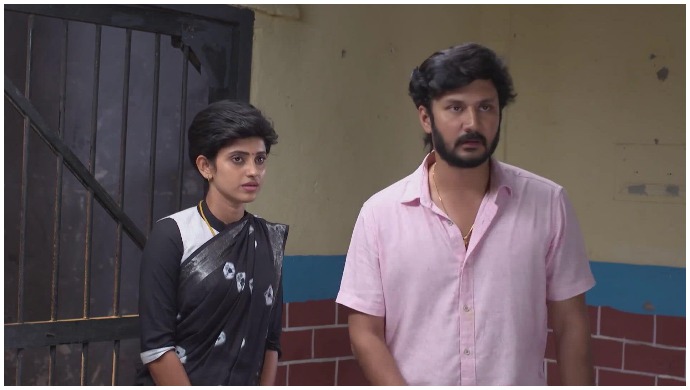 In the previous episode of Sathya, we see Prabhu going to the police station once again to meet his wife and this time too, the police constable asks him to leave. On the other hand, a lady constable, who feels bad for Sathya, gives her the phone to let her make a call to her husband. After Sathya speaks to Prabhu on the phone, he feels better but he still attempts to request the constable to allow him to meet his wife. He also tries to bribe the police but fails in that regard too. So, Prabhu hits the cop on his nose.

In the upcoming episode, Prabhu, manages to meet his wife Sathya, and have dinner with her at the police station. Sathya, who hasn’t eaten anything thinking that her husband would also be hungry, finally agrees to eat if Prabhu also joins her. While the two spend some good time together, the inspector turns up. Looking at these two together at the station, he lashes out at the constable. While the constable tells the inspector that Prabhu has hit him in the nose and that’s why he kept him here, the inspector doesn’t listen to him and and asks him to throw Prabhu out.

When Yaaradi Nee Mohini’s Vennila Had A ‘Dream Come True’…

5 Reasons Why You Should Watch Sasikumar And Mia George's Vetrivel

Women's Day 2020: 5 Female-Centric Films You Can Binge-Watch This Weekend