Here's what Prabhu does to meet his wife Sathya, who is kept in jail for a crime she never committed. 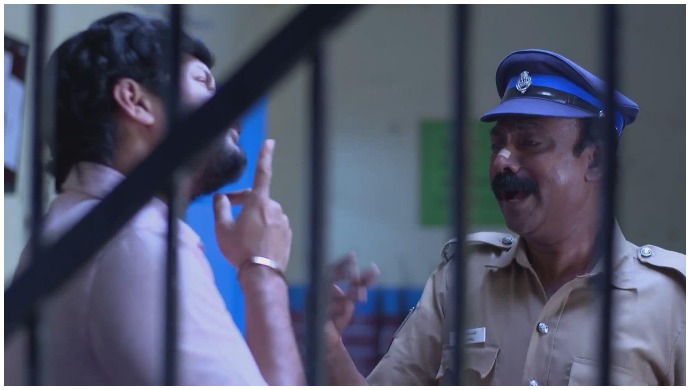 In the previous episode of Sathya, we see Prabhu going to the police station to meet his wife but the police constable asks him to leave as he cannot allow him to meet the accused. So, he tries to bribe the cop but he doesn’t seem to give in. Then Prabhu comes up with a different plan to meet his wife; he hits the constable on the nose. Meanwhile, another lady constable gives her phone to Sathya so that she can talk to Prabhu if not meet him.

In tonight’s episode, despite repeared requesting and bribing, the police constable does not allow Prabhu to meet his wife Sathya, who is in jail. So, Prabhu hits him on the nose so that the cop will keep him in jail the entire and that way, he can be with his wife. As per the plan, he is kept in jail and he finally meets Sathya. Thay also have dinner together. And just when they are spending a good time together, the inspector turns up and sees them together. He lashes out at the constable. While the constable tells the inspector that Prabhu has hit him on the nose and that’s why he kept him here, the inspector refuses to listen to him and asks him to throw Prabhu out.

The following morning, Sathya’s mother, Patti and few other boys come to visit her in jail but the constable again doesn’t allow them in. After a lot of requests, he finally agrees to let only two people go and meet the accused. The mother and Patti then go to meet their daughter at the station. Meanwhile, Prabhu, who is driving his mother to the station, tells her not to inform their father about Sathya being in jail. He further adds that his father, who is already very upset about staying away from the family, will get even more sad if he hears about Sathya. His mother agrees.

+
Explore More
What do you think of tonight’s episode? Do you think, Anita and her uncle will succeed in their plan or will Sathya manage to come out of jail? Share your thoughts in the comment section below. Also, watch Enakkul Oruvan, a 2015 Tamil thriller film starring Siddharth, Deepa Sannidhi and Srushti Dange, on ZEE5.

Sathya 25 February 2020 Preview: Will Sathya Have To Spend Another Night In Jail?