Sathya's perriappa wants the house to be in his name, suggests Prabhu to leave Janaki in old age home. Hearing this, Sathya lashes out at perriappa. 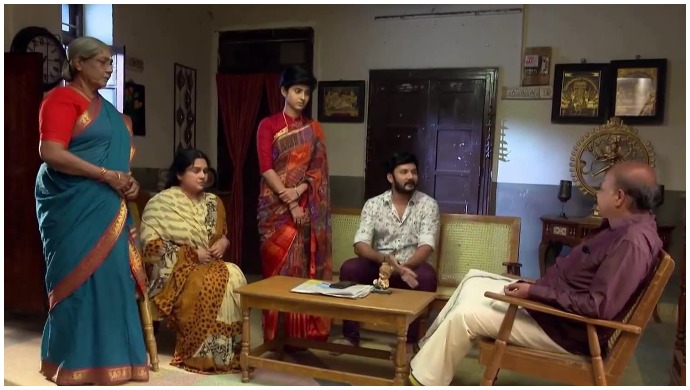 In the previous episode of Sathya, Prabhu confesses to his mother about his argument with Sathya over a gift on Valentine’s Day. He tells Yuvasree that she broke his ice frame on purpose to hurt him as she knew how much it meant to him. Yuvasree then explains to him that it was a misunderstanding. She adds that Sathya did not break his ice frame. In fact, Sathya hand made his Valentine’s gift in the wee hours of the morning. But instead of appreciating, Prabhu upset her. So she asks him to get her home. Meanwhile, Kathir’s mother warns him to stay away from his girlfriend Soumya. Kathir’s sister explains to him why his mother is asking him to leave Soumya.

In tonight’s episode, Sathya’s perriappa comes home and accuses her mother Janaki of cheating him. He then says Janaki had promised him that she will transfer the house in his name if he helps her with money but she still hasn’t vacated the house. He then accuses her of pretending to be sick so that no one throws her out of the house. Prabhu, who witnesses Sathya’s periappa’s insensitive behaviour, offers to pay him the money that he helped them with and requests him to not take away the house from them. But the man does not agree and tells them that he will gather the village people and have a panchayat over this. He also insists that he will get the house papers written in his name with their help. As he leaves, Prabhu follows him to convince him. He requests him to forget about the house and he will pay as much money as the house would cost. But the man tells him that he wants only that house as it is his father’s property and he has the right over it.

Sathya’s periappa then suggests Prabhu to take his mother-in-law to his house. But when Prabhu tells him that she will never come to his house, Sathya’s periappa asks him to leave Janaki in the old age home. Sathya, who overhears this, intervenes and tells him that they will not give the house and he can do whatever he wants. Later, Prabhu talks to Sathya about the ice-frame and apologises to her for the way he spoke to Sathya that day. Sathya tells Prabhu that he still fails to understand her feelings. She also mentions that she is not hurt by his words but what he thinks about her. She adds that she can’t live with a person for her whole life with just an expectation that someday he may like, love and accept her. Sathya then tells him that she will only go with him if he completely accepts her and only loves her; until then she advises him to stay away. Will Prabhu realise his love for Sathya? Stay tuned!

What do you think of tonight’s episode? Let us know in the comment section below. If you would like to watch more such shows, check out Nachiyarpuram, now streaming on ZEE5.