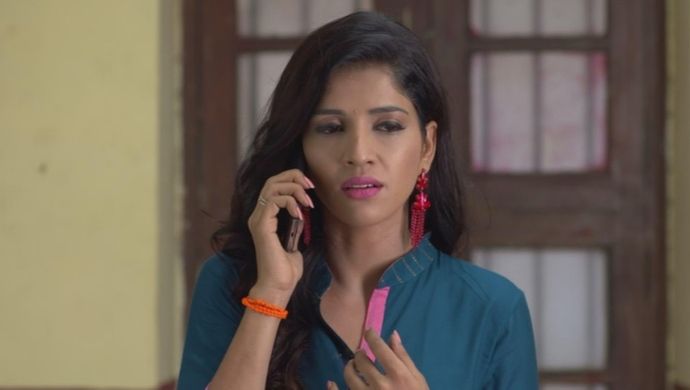 In the last episode, we saw that Kathir and his friends conspired with Sathya to get her married to Prabhu. Sathya’s mother and grandmother are pleasantly surprised when she asks for her father’s ring. They tease her and tell her that they know all about the ‘Amul Baby’ in her life. Curious to know what’s happening, Divya makes Sathya confide in her about her plans to get married to Prabhu in the court. All of Divya’s calls to Prabhu go unanswered as Kathir’s friends hide the phone from him to stop her from ruining the surprise wedding.

If you missed watching the previous episode, then you can catch it here.

In today’s episode of the show, Divya will finally manage to get in touch with Prabhu and ask him about his whereabouts. Prabhu hesitates and tries to clarify why he is at the Registrar’s office but Divya interrupts him. She reveals the truth about Sathya and Kathir’s plan to him which leaves him shocked. Will Divya successfully stop Sathya and Prabhu’s marriage? Or is she too late? We already know that Sathya and Prabhu are in love with each other but she is unaware of the fact that he is also her sister, Divya’s fiancé. Will Sathya end up finding out the truth about Prabhu? To know more, log into ZEE5 to catch the whole episode of Sathya when it airs today evening.

For the ones who missed the last couple of episodes, Sathya confesses her love for Prabhu but since he is engaged to her sister, Divya, he hurts her intentionally so she backs off. However, Prabhu is also in love with Sathya. Divya decides to marry Prabhu for his money and tries her best to keep Sathya and Prabhu apart.

For more such entertainment, watch Iniya Iru Malargal, the story of two sisters Pragya and Ammu, streaming on ZEE5.

Watch Actress Trisha Portray The Role Of An Evil Spirit In The Film, Mohini