Ayesha knows how to look just perfect every single time she experiments with her looks. Scroll to see the latest pictures of the actress. 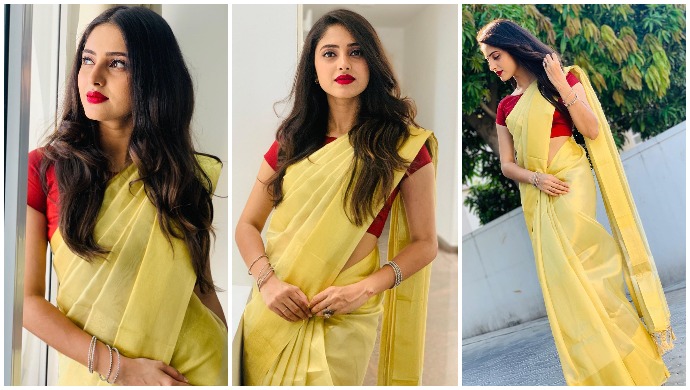 Small screen actress Ayesha, who is winning hearts for her portrayal of the title role in Zee Tamil’s telly series is quite active on social media. The actress frequently shares pictures of her on the photo-sharing app. She regularly posts her recent updates from the photoshoots or behind-the-scenes pictures with her onscreen husband Prabhu (actor Vishnu). While the ardent viewers are already fans of Ayesha and Vishnu’s on-screen chemistry, their off-screen camaraderie too is winning hearts.

Recently, the actress posted a picture on Instagram in a simple yet elegant saree. She looking right into the lens and we just can’t take our eyes off her.

Check Out the Pictures Here:

Going by the latest pictures, it looks like, they were clicked during the lockdown in the premises of her building.

In these pictures, Ayesha opted to pair the golden silk saree with a maroon mega sleeves blouse. While she went for a natural makeup look with red lips and highlighted cheeks; she kept the accessories minimal by adding only pressed earrings, bangles, and a ring.

Ayesha has never shied away from experimenting with various styles and patterns. The diva surely knows how to look just perfect every time she experiments with style.

On the professional front, Ayesha shot to fame after one of her dubsmash videos went viral on the Internet. While Ayesha made her debut with Nambi Raja’s Ponmagal Vanthal alongside Vicky Krish; she garnered prominence only after her stint in popular TV show titled Maya.

Currently, the actress can be seen essaying the role of a tomboy in a much-celebrated show titled Sathya, which airs on ZeeTamil. However, the shooting of the show was suspended after the nationwide lockdown. But the latest reports suggest that the show will soon resume with new episodes as permission for the shooting has been given amid lockdown.

If you’re a fan of Tamil films, you must check out Vijay Starrer Mersal, currently streaming on ZEE5.