Sathya once again scares Prabhu by saying that the latter has coronavirus. Will Prabhu believe her? Scroll down to see what happens next. 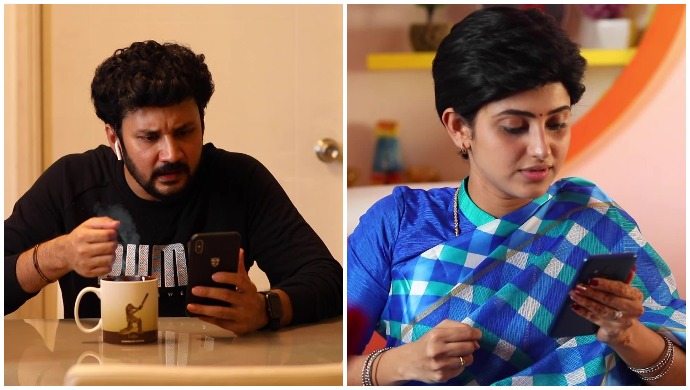 In the previous episode of Sathya Lockdown Special, Sathya tells everyone in the family that Prabhu has Coronavirus. After learning the same, Prabhu’s mother, Yuvasree calls him to seeks details. Later, Anita too joins the video call and lashes out at Prabhu for not taking precautions. Prabhu, who is annoyed by their talks, asks them to stop calling and irritating him.

After they hang up, Sathya tells him that she will check on Google if there are any remedies to cure the virus. When Sathya calls back, Prabhu does not answer. Later, on the call with Sasi, Prabhu, who thinks that Sathya is on the other line pretends to not being able to deal with the separation. He acts as if he is missing Sathya terribly during the call.

In the new episode, Prabhu, who learns that Sathya is not on the call, feels that he wasted his time pretending to miss her. He then tells Sasi that he is happy about the fact that he is stranded in Bangalore and enjoying his alone time. Prabhu also lashes out at Sasi for earlier, when he did not inform Prabhu about Sathya being on the conference call.

He further adds that Sathya is torturing him by constantly calling and also spreading the false rumour that he is affected by Coronavirus. While the two are talking on the phone, Sathya calls Sasi on the other line. So, Sasi asks Prabhu if he should add her to their call. Prabhu warns him that he should not make any more conference calls and threatens to bash him if he adds Sathya on their call. Then, Prabhu hangs up.

Later, Sathya calls Prabhu, but the latter does not answer but leaves a message saying he is busy. Then Prabhu hears the sound of the Police siren and thinks it to be an ambulance. So, he immediately calls Sathya and asks the reason for informing the doctor and tells her that he is really scared about being quarantined.

Sathya realises that it is a police jeep and not an ambulance. She chooses not to disclose the same to him and instead takes advantage of the situation. She demands Prabhu to answer her calls always and if he fails, then she’ll send the ambulance again. Sathya again scares Prabhu by saying that he has the virus and this time, he believes her. What all will Sathya make Prabhu do in such case? Stay tuned!

Sowkarpettai Trailer: Raai Laxmi Will Send Shivers Down Your Spine

If Your Child Loves Sci-Fi Then Atomicron: The Alliance Must Be On Your…

Also, if you love watching Tamil films, you must check out Vijay Sethupathi and Anjali’s Sindhubaadh, now streaming on ZEE5.