Sisters Sathya and Divya, both want Prabhu as life partner for different reasons. Who will Prabhu marry? Find out in this special wedding episode. 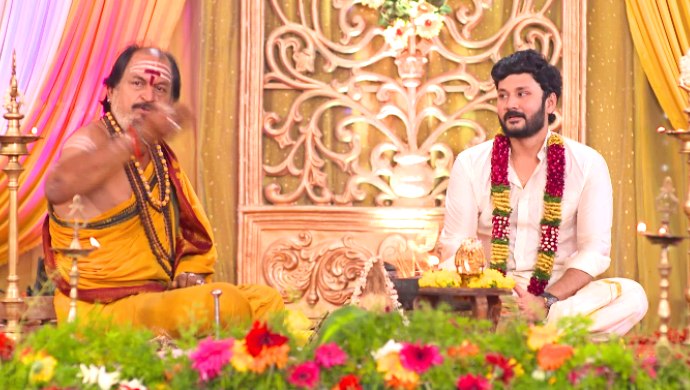 In the previous episode, we saw the Guruji declare during the nalangu ceremony that both jadhagams match perfectly and the girl’s jadhagam shows that she is destined to marry the next day as scheduled. This alarms Divya as she recollects that she swopped her jadhagam with Sathya’s when giving it to Prabhu’s family. She meets up with Salim late that night and tells him that she doesn’t Sathya at the wedding tomorrow as she is always sticking close to Prabhu and thus embarassing her. This upsets Salim who is really Sathya in disguise. Just then Prabhu’s sister, husband and sister-in-law arrive at the scene. Deceived by Sathya in her disguise, they ask Divya what she is doing with a man so late in the night, and the day before her wedding. Anita calls Prabhu to expose what is happening.

The current episode opens with Prabhu walking in to see Divya and Salim together, ‘exposed’ by his sister. Prabhu and Kullaboodham start laughing and ask Sathya to remove her disguise. His sister and her family are aghast on seeing Salim transform into Sathya and berate her for doing such a thing. Divya, meanwhile, is horrified because she has asked Sathya herself to ensure that Sathya is not present at the wedding the next day. She later apologises, but a dejected Sathya walks away from the mandapam anyway, trying to put distance between herself and the wedding.

Next day, Divya is nowhere to be found and Anita broadcasts this to the entire wedding party. It turns out that Bala had kidnapped her and left a letter in her name, stating that she is running away because she doesn’t want to get married. The letter is found by Anita’s husband who shows it to everybody. Anita confronts the guruji, stating that as per his reading of the two jadhagams, he had declared the wedding to be a definite thing. Then Sathya’s grandmother confesses that the jadhagams were actually switched by Divya and that it actually belonged to her younger sister. Everyone is shocked to know that Divya has a younger sister and even more shocked that the sister is Sathya. The guruji then says that only Sathya can marry Prabhu. Kathir says Sathya is not present, but her grandmother is confident that Sathya has come to attend her sister’s wedding. Sathya is revealed to be present at the hall in a burqa!

Prabhu takes his father aside and tells him that he can’t marry Sathya. He tells his father that he never saw Sathya that way and that he had dreams and plans with Divya. However, his dad gets all emotional and Prabhu reluctantly agrees. Similarly, Sathya speaks privately with her mother and grandmother. She says she cannot marry Prabhu because Divya wanted to marry him. She is not convinced that Divya wrote this letter. Her grandmother says that it is now upto Sathya to save the family’s honour and reputation by marrying Prabhu.

The reluctant new bride and the equally hesitant groom go sit at the mandap. Meanwhile Divya, who was tied up, manages to escape her bondage, overcome Bala and run away from there. She gets chased by Bala and his men as she tries to figure out a way to reach the mandapam. However, she eventually falls unconscious on the road, exhausted. Prabhu, with his mind full of memories of Divya, ties the thali around Sathya’s neck. What will happen to Divya? Will Prabhu accept Sathya whole-heartedly? To find out, watch Sathya every evening, now streaming on ZEE5.