Sathya To Propose To Prabhu On Her Birthday?

Sathya’s friends, who know that Parbhu is engaged to her elder sister, Divya, want her to get married to him. 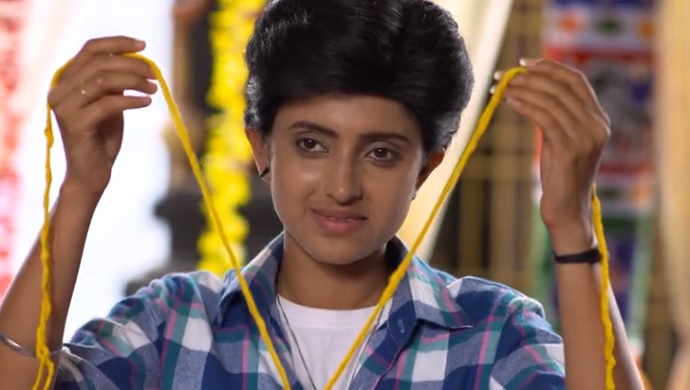 Fans of Sathya have been eagerly looking forward to seeing Amul Baby and Rowdy Baby together. And the day isn’t too far, it seems. Rowdy Baby aka Sathya has decided to propose to Prabhu on her birthday but will she be able to profess her love for him? Sathya’s friends, who know that Parbhu is engaged to her elder sister, Divya, want her to get married to him. However, they haven’t disclosed anything about his relationship status to her yet.

Sathya’s friends Manda Poona, Panai Manda, Thakali want to see her get married to Prabhu. Interestingly, Prabhu’s friend Shashi also wishes to see him with Sathya and not Divya. Sadly, Prabhu is not even aware of Sathya’s feelings for him. For the unversed, when Shashi tries to find out what Prabhu thinks about Divya, he realises that his friend is fond of Sathya. He even tells Prabhu to reconsider his decision to marry Divya because he makes a better pair with Sathya.

However, Prabhu completely rubbishes Shashi’s suggestion stating that he can never think of Sathya as his life partner. According to Prabhu, Sathya cannot become a good wife because she will not be able to gel with his family traditions and rituals. He is also not aware of the fact that Sathya is his fiancée Divya’s younger sister. How will Prabhu react when the truth gets revealed? Moreover, Divya is two timing Prabhu. She is in a relationship with Bala, who is richer than Prabhu, so there are chances she might dump the latter.

How do you think the story will unfold from this point?