Sembaruthi 1 November 2019 Written Update: Parvathy Gets A Scolding From Akhilandeshwari 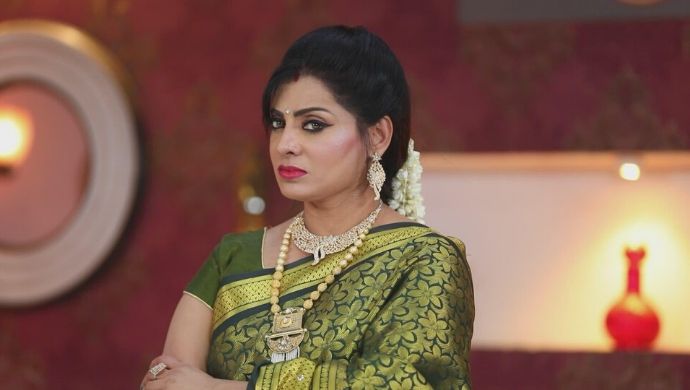 In the previous episode, Parvathy and Mithra get into a heated argument over the former spending a lot of time in Adithya’s room. Parvathy gives it back to Mithra who is taken aback by her confidence. Later, Parvathy overhears her talking to Nandini and devising a plan to leak confidential information from Akhilandeshwari’s laptop. Parvathy tells Adithya about it but he is out of town so she decides to take on this tough assignment of stopping Mithra. The next day, Mithra takes Akhilandeshwari’s laptop after watching her leave. Parvathy immediately goes to the garden area and tells Akhila that Purushothaman is calling her.

Akhila comes back and Mithra immediately puts the laptop away so she doesn’t see her. Purushothaman also walks in at the same time and is surprised when Akhila asks him why he called her. But he quickly notices Parvathy’s signals and distracts Akhila. She later tells him about Mithra and Nandini’s plans.

Later on, Akhila asks Parvathy to accompany her to the temple and she readily agrees. She realises that Mithra will be left alone so suggests to Akhila to get her along, too, but Mithra makes an excuse to not go. Parvathy follows Akhila in the car. Not knowing how to stop Mithra, Parvathy rats her out to Akhila, who fumes at her. Akhila tells her that she won’t spare her if she is wrong about Mithra but Parvathy tells her that she is sure.

At home, Mithra is trying her best to figure out Akhilandeshwari’s password but turns out the one Nandini gave is not working. So she tries something else and finally succeeds. Just then, Akhila storms into the house with Parvathy and Purushothaman following her. She walks into her room and sees Mithra fidgeting with her laptop.

Mithra makes some kind of an excuse and quickly removes the pen drive before anyone notices but a part of it falls under the bed. Parvathy tells Akhila that Mithra is lying but Akhila tells her off and asks her to leave. Mithra leaves the room and Purushothaman tries to tell Akhila that it’s wrong to doubt Parvathy’s intentions.

Just then, Akhila reveals that she is not doubting Parvathy but is actually suspicious of Mithra since she had changed the laptop’s password before they left for the temple. On the other hand, Sundaram also scolds Parvathy for interfering unnecessarily.