Adithya assures her that no matter what happens, he will not leave her. He asks her to stand by his side and never leave him alone. 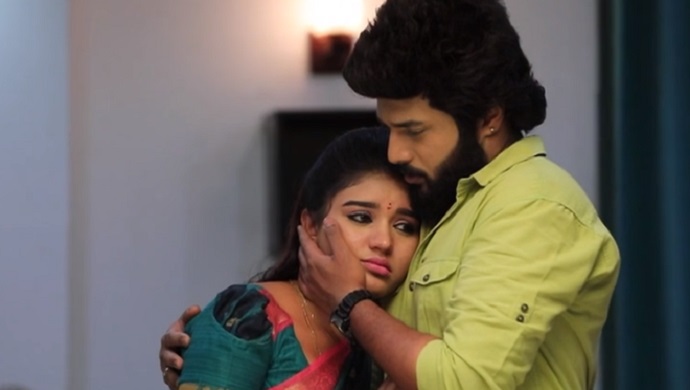 We, know you have multiple questions and are eager to know the answers. Just take a deep breath and read on. Today’s episode will leave Parvathy-Adithya fans grinning from ear to ear, because they will finally get to see their favourite couple spending some “us” time together. Parvathy is back in Adithya’s life and how!

Here’s how today’s episode unfolded. To follow Nandhini’s suggestion, Vanaja tries to instigate Aishwarya against Parvathy by telling her that she is a hypnotist who has cast her evil spell on the family of the Adhikadavurs. She abuses Parvathy and tries to create a rift between the two friends. After listening patiently to Vanaja, Aishwarya hits back. She gives Vanaja an earful for accusing Parvathy of being an opportunist. Aishwarya tells Vanaja that she is wise enough to know who is trust-worthy and who isn’t. After Aishwarya leaves, Uma and Mithra get worried. They fear they might not be able to instigate Aishwarya against Parvathy. Vanaja asks them not to worry and says they must keep trying until they succeed.

Meanwhile, Sundaram, Parvathy and Ganesh start their journey to the city from their village. Akhilandeshwari and Purushothaman leave in the car driven by Sundaram while Parvathy and Ganesh are on board Arun and Adithya’s car. After travelling a few meters, Adithya purposely punctures his car and sends Arun and Ganesh away to get a mechanic. Thus he gets some time to be with Parvathy. When she apologises to him for leaving the city without informing him, he asks her not to give an explanation. She reveals that Sundaram had seen her with him and didn’t want their relationship to blossom. Adithya assures her that no matter what happens, he will not leave her. He asks her to stand by his side and never leave him alone. For more entertainment, watch Piriyadha Varam Vendum, a love story that transcends time, on ZEE5.