Sembaruthi 10 October 2019 Preview: Akhila Has A Tough Task For Her Daughters-In-Law 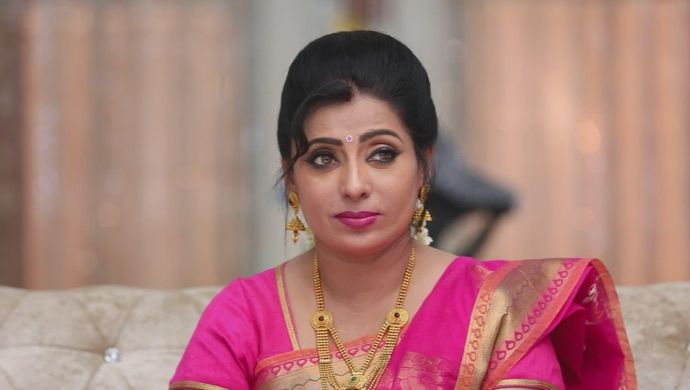 In the last episode, we saw Akhilandeshwari trying to remember what Adithya had confessed to her at the hospital. She was disturbed mentally since she could only remember parts of the conversation. Purshotam also tries to distract her and lies to her saying that Adi never spoke to her at the hospital, when she was lying unconscious. The other members of the house do not want her to know the truth about Parvathy and Adithya’s secret marriage since she just started warming up to Parvathy. Vanaja and Mithra, on the other hand, try to expose Adi-Parvathy but fail to do so.

In the upcoming episode of the show, Akhila tells the family that the daughters-in-law of the house will have to go to the temple and retrieve a Shiv-ling that lies in the bottom of the pond. While Aishwarya doesn’t seem so baffled, Mithra looks worried about it. Akhila then clarifies that she could never tell them about the entire conversation she had with Guruji. She also asks the men of the house to not accompany them to the temple since it has to be done by the women in the house. Will Parvathy also coincidentally be a part of this, since she is also Akhila’s daughter-in-law? Will Vanaja plan to expose Adi and Parvathy on this trip? To know more, log into ZEE5 to catch the whole episode of Sembaruthi when it airs today evening.

In case you missed that last couple of episodes, Akhilandeshwari meets with an accident and is attacked by goons before that. Parvathy, who is her employee’s daughter and is secretly married to her son Adithya, saves her from the goons. Akhila goes through a personal transformation after the accident but is unaware of Adithya and Parvathy’s relationship. For more such entertainment, watch Sathya streaming on ZEE5.